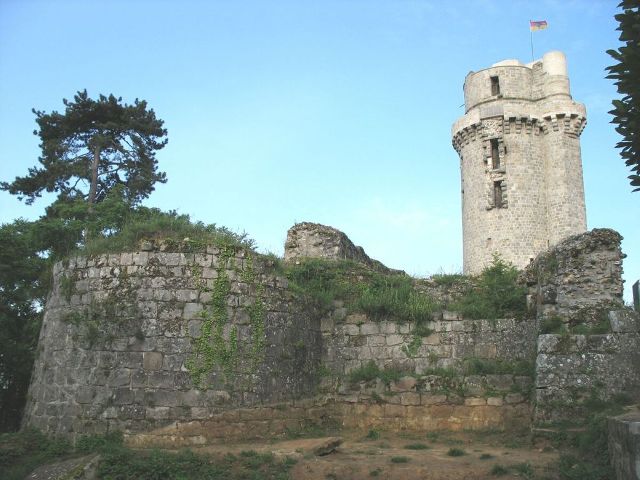 Location: Montlhéry, in the Essonne departement of France (Ile-de-France Region).
Built: v. 991-1254.
Condition: Ruines.
Ownership / Access: State property.
ISMH Reference Number: PA00087970
Notes: Château de Montlhéry is a strong French castle in the town of Montlhéry in the heart of the ancient country of Hurepoix, on the left bank of the Orge, in the department of Essonne and the region Ile-de -La France.Towards 991, Thibaud de Montlhéry, first lord of the forest by his charge, fortified the hillock of a feudal mound, consisting of a wooden tower protected by a wall. The foundation ruins reveal an oval polygon thirty meters twenty-five, with a platform of ten meters across and seven meters high. It was his son, Guy I of Montlhéry that marrying Hodierna Gometz, lady Gometz and La Ferte became more powerful. He built the Saint-Pierre priory and Church of Our Lady, his wife built the monastery of Longpont. Their children accrurent this power, Milon I of Montlhéry became Viscount of Troyes and Gui I de Rochefort became Count de Rochefort. All three were associated with Philip I to the annulment of Lucienne de Rochefort, her daughter with Louis VI, heir to the throne. In 1096, Milo I and his son Guy II, his brother Guy de Rochefort and his nephew Hugh of Crecy left for the First croisade.Mais Gui Gui said Montlhéry II Keychain fled to Antioch and was dishonored. He was forced in 1104 to abandon his castle the king in exchange for the marriage of his daughter Elizabeth Montlhéry with the heir to the throne of Philip Mantes. But in 1105, Milo II of Montlhéry claimed the lordship and attacked the castle by trickery. He was once dismissed by Gui I de Rochefort. For security and despite the return of peace, Louis VI was destroying fortifications with the exception of the tower. He gave the remains to his brother Philippe de Mantes who offered to Hugh of Crecy. Forced to abandon the king, the castle finally returned to Milon II. In 1118, his cousin Hugh disappointed lifted him and murdered him in his castle in Châteaufort. Punished, he must finally make his land to the royal power.In 1144, Louis VII of France stayed with his minister Suger at the castle. In 1227, St. Louis took refuge in the castle before the risk of abduction in Etampes. In 1311, Count of Flanders, Louis I of Flanders Dampierre said Louis, Louis de Nevers or Louis de Crecy, was imprisoned here. In 1358, the English besieged the castle but did not take it. In 1360, they succeeded until the appointment of a new provost by Charles VI. In 1409, the Armagnac took the castle, driven in 1413 by John the Fearless himself beaten in 1418 by the Provost of Paris Tanneguy du Chastel. In 1423, the castle fell into the hands of John of Lancaster until 1436 when she returned to Charles VII. On 16 July 1465, the castle served as a rear base for Louis XI of troops during the Battle of Montlhéry against Charles the Bold. In 1529, Francis Perusse des Cars became count of Montlhéry. In 1562, Louis, Prince of Condé took the castle became the headquarters of the Calvinists. In 1585, he returned to Henry III, who ordered the repair of fortifications. On 5 April 1590, Henri IV stayed last time at the castle before the governor decides Paris in 1591 it was dismantled with the exception of the dungeon. In 1764 and 1772 Philippe de Noailles, comte de Montlhéry establishes a minutes stigmatizing the dilapidated state of the castle. The trenches were then filled and became gardens between 1767 and 1771. In 1822, François Arago, accompanied by Joseph Louis Gay-Lussac and Urbain Le Verrier, undertook to calculate the speed of sound by pulling a gun from the top of the tower dark night, visible and heard at the Observatory of Villejuif. In 1823 was installed a tower of Chappe at the top, visible from Fontenay-aux-Roses and Torfou. On 5 April 1842 the State took possession of the tower which was listed building two years ago. Henri Labrouste undertook the repair of the tower and renovated the terrace until 1846 Garrez, added walkways and the entrance gate, Selmersheim completed the work in 1889. On June 5, 1874, Alfred Cornu measured at its top speed light from the Paris observatory. May 7, 1914, an inventor named Defieber tested there a parachute model. June 20, 1934, the lightning fell on the turn damaged.

How To Get To Château de Montlhéry (Map):