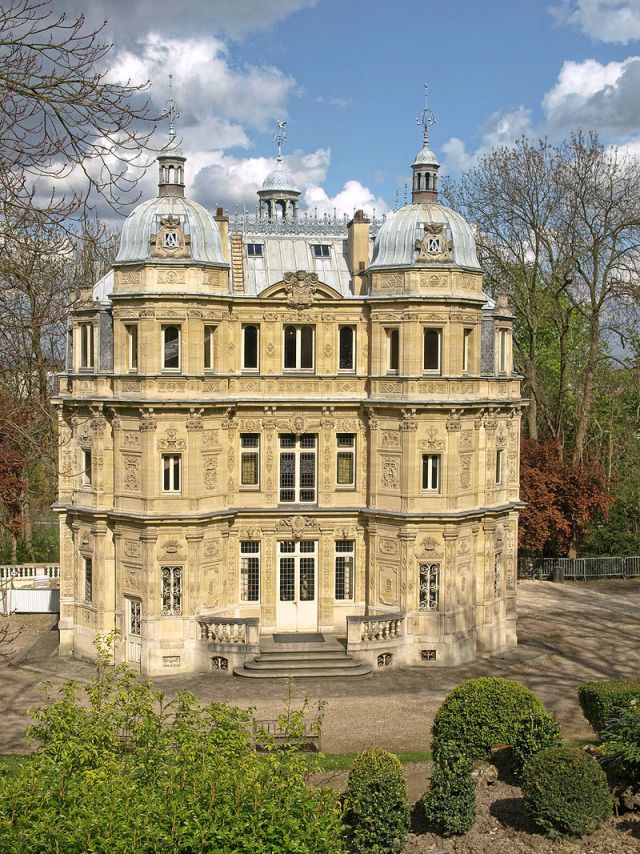 Location: Le Port-Marly, in the Yvelines departement of France (Ile-de-France Region).
Built: 1844.
Condition: In good condition.
Ownership / Access: Owned by a public institution.
ISMH Reference Number: PA00087575
Notes: Château de Monte-Cristo is the home that the writer Alexandre Dumas had built in 1846 by architect Hippolyte Durand in a nine hectare park, built in the English style, in Port-Marly (Yvelines).It was from a vineyard on the slopes of Port-Marly, where Alexandre Dumas - who resided in Saint Germain en Laye - liked to walk. In 1844, the writer, in full glory, bought the land and commissioned the architect Hippolyte Durand, a castle in Renaissance style, with a working cabinet in a neo-Gothic style, surrounded by a park with 'English with water, caves, rock gardens. At the housewarming of the house, 25 July 1847, 600 people were invited to a meal. Short of money after the bankruptcy of his theater, Alexandre Dumas was forced to sell the property in 1848. It was bought and restored in 1894 by Hippolyte Fontaine, who made his fortune in the manufacture of industrial dynamos. Abandoned, the castle of Monte Cristo almost disappeared in the 1960s to make way for a real estate program. To prevent its demolition, the historian Alain Decaux founded the Society of Friends of Alexandre Dumas. Finally in 1970 the house is the property of municipalities: Port-Marly, Marly-le-Roi and Pecq, all financially involved, via the "Monte Cristo intercommunal Union" in the management and operation of Castle Monte Cristo. The Society of Friends of Alexandre Dumas also participates in the management of the castle.It has been restored, thanks to the patronage of King Hassan II of Morocco, who financed the rehabilitation of the Moorish lounge. This show was created by two Tunisian artisans attached to the Bey of Tunis, Mohammed Haji Younis and his son, Alexandre Dumas brought back with him from one of his trips. It is now a public museum since 1994. The area is mainly in the remembrance of its illustrious occupant. The park overlooking the Seine, invaded maples and acacias, lost the views of the valley and today require a background restoration. At the end of 2015, a new restoration project was implemented. Worth 921,000 euros, it will last until May 2016.

How To Get To Château de Monte-Cristo (Map):