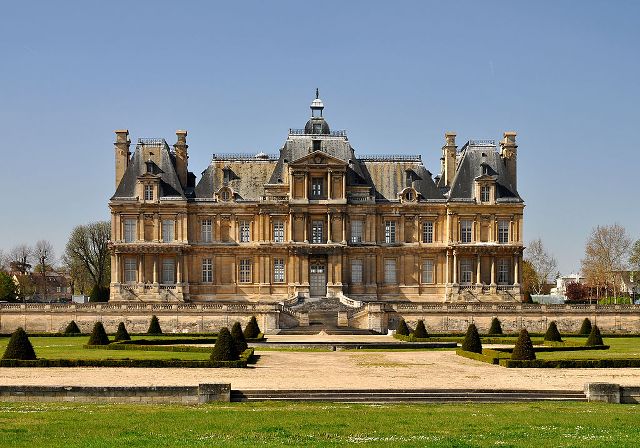 Location: Maisons-Laffitte, in the Yvelines departement of France (Ile-de-France Region).
Built: 1640.
Condition: In good condition.
Ownership / Access: State property.
ISMH Reference Number: PA00087490
Notes: Château de Maisons-Laffitte originally castle houses or Maisons-sur-Seine Castle, located in Maisons-Laffitte in the Yvelines department, is considered a masterpiece of civil architecture of the seventeenth century. Constituting a reference in the history of French architecture, it marks the transition between the end of the architecture of the late Renaissance and the classicism.The history of the area Maisons-sur-Seine is closely linked to that of the family of Longueil, a family of parliamentarians belonging to the nobility dress. In 1460, John III of Longueil was obtained by purchase part of the manor houses, divided over the fourteenth century. In 1602, John VIII of Longueil is buyer door the second half of the lordship. On 18 October 1608 the Dauphin of France Louis, then aged seven, is received in Maisons-sur-Seine by John VIII of Longueil for a snack in the park. The dolphin returns to visit 6 September 1609. From 1610, even though he became king under the name of Louis XIII, he regularly visits John VIII of Longueil in his land houses on the occasion of followed hunts meals or snacks.In 1629, René de Longueil inherits wealth and property of John VIII, his father. In politics astute business of his time, the potential of the Houses of lordship does not escape him close to both of the royal capital and the castle of Saint-Germain-en-Laye, the favorite hunting residence of King Louis XIII .From the 1640s, René de Longueil devoted part of his fortune, which received substantial dowry to his wife Madeleine Boulenc de Crevecoeur (deceased since 1636), construction of a lavish mansion able to receive the king. The construction of the castle itself ended around the year 1650 but several other structures and facilities (stables, gardens, park entrances ...) will be completed during the next two decades.

How To Get To Château de Maisons-Laffitte (Map):