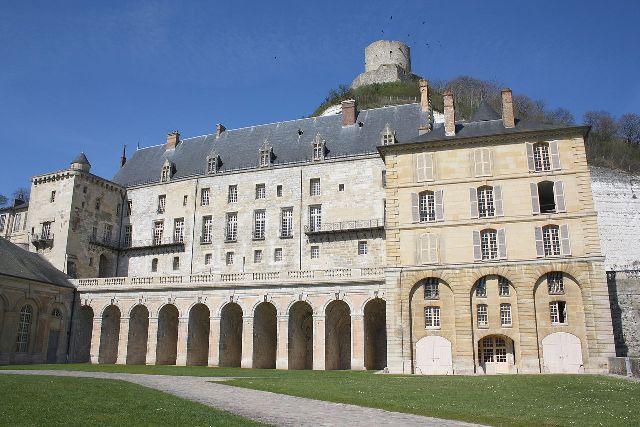 Location: La Roche-Guyon, in the Val-d'Oise departement of France (Ile-de-France Region).
Built: 16th century.
Condition: In good condition.
Ownership / Access: Owned by the department.
ISMH Reference Number: PA00080181
Notes: Château de La Roche-Guyon is a French castle of the town of La Roche-Guyon in the Val-d'Oise to the gates of Normandy on the right bank of the Seine. The old ruined fort castle, dominated by its keep at the top of the hill has received significant additions in the eighteenth century at the foot of the hill and a garden and vegetable garden "French": the garden of the castle of La Roche-Guyon.This castle, listed as a historic monument, owned by the Duc de La Rochefoucauld is now managed by a public institution for cultural cooperation (EPCC) grouping the Val-d'Oise department, the municipality of La Roche-Guyon, Joint union development and management of the regional park of french Vexin and state.Enlarged and embellished many times, especially during important work undertaken in the eighteenth century by its current owners, the La Rochefoucauld, the old fortified town gradually became a place of pageantry. Since 2010, the exhibition "We moved to the Castle" has transformed the place into temporary museum revealing contemporary works the corner of a gallery or a wall, like columns installed by Daniel Buren.

How To Get To Château de La Roche-Guyon (Map):