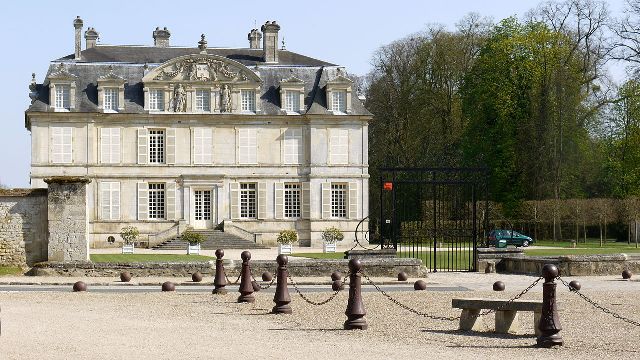 Location: Guiry-en-Vexin, in the Val-d'Oise departement of France (Ile-de-France Region).
Built: 17th century.
Condition: In good condition.
Ownership / Access: Privately owned.
ISMH Reference Number: PA00080082
Notes: Château de Guiry is located in the town of Guiry-en-Vexin, Val-d'Oise. The castle was built from 1665 to André Marquis de Guiry according to plans designed by François Mansart, recovering the foundations of the first building of the sixteenth century destroyed by fire. The architect and partner die in 1666, but the work is completed, however, by the nephew Jules Hardouin-Mansard. rare case in history, the area remains in the same family for thirteen centuries, is as far back as the first written records that mention. Classical style, the castle has one floor and an attic. Very simple, it is distinguished by the harmony of proportions and masses of reports, and the geometric rigor of its plan. The ground floor is based on a high base, including oculi to illuminate the cellar. The facade on the courtyard is organized into seven bays, the first and the last match of the preliminary body slightly projecting, and the three in the middle are topped by a pediment arc. The relief that adorns is carved in the nineteenth century and represents the arms of Létourville Rosset. The two statues of the piers between the three windows symbolize two of the four cardinal virtues, Justice and Strength. The front garden is almost identical, except that it has no pediment. All windows are rectangular. The door in the middle of the ground floor is flanked by two simplified pilasters and topped with a sketched entablature. Skylights are fitted with small triangular pediments summoned to a ball, and transoms are marked by eaves. Chimneys are treated with great care, and each side ends with a small pediment arc.