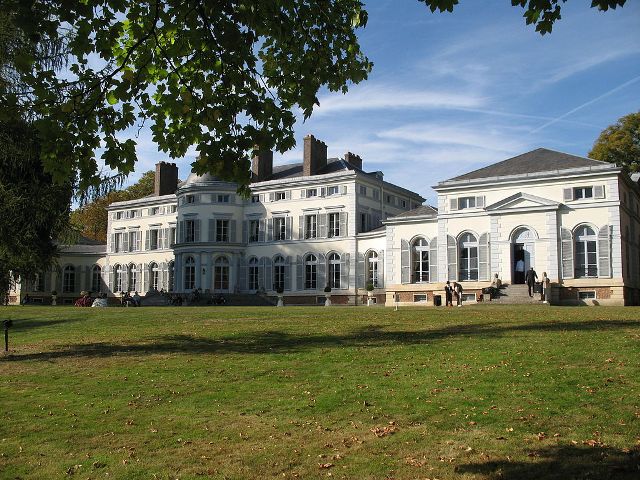 Location: Montfort-l'Amaury, in the Yvelines departement of France (Ile-de-France Region).
Built: 1815.
Condition: In good condition.
Ownership / Access: Privately owned.
ISMH Reference Number: PA00087795
Notes: Château de Groussay is located rue de Versailles in Montfort l'Amaury in the Yvelines.This "country house" 1820s was transformed into a castle by Charles Beistegui who acquired it in 1938, at the dawn of World War II. The building is not protected under the Historic Monuments, it is free to modify it at will; thus it extends the two wings of a theater and a ballroom called Dutch room and creates an original aesthetic work ... but ephemeral.Elements of interior design chosen by him have been preserved: those found in the Theatre (opened in 1957 with the Impromptu, Marcel Achard, played by the Comedie-French), and the following parts: the Gallery Goya, the great room, the Russian lounge, billiards, Dutch Gallery, Grand Salon Dutch and the dining room. The library has two spiral staircases; Beistegui did remove a ceiling and two bedrooms to give it more height; a shot of this piece shows the pier of a fireplace topped by a similar picture - or is it of it? - La Masquerade Bridal José Conrado Roza (1778) acquired in 1985 for the "Museum of the New World" of La Rochelle (17) where it is exposed.Several mahogany chairs adorned with its golden monogram have been kept in the hall of the castle.

How To Get To Château de Groussay (Map):