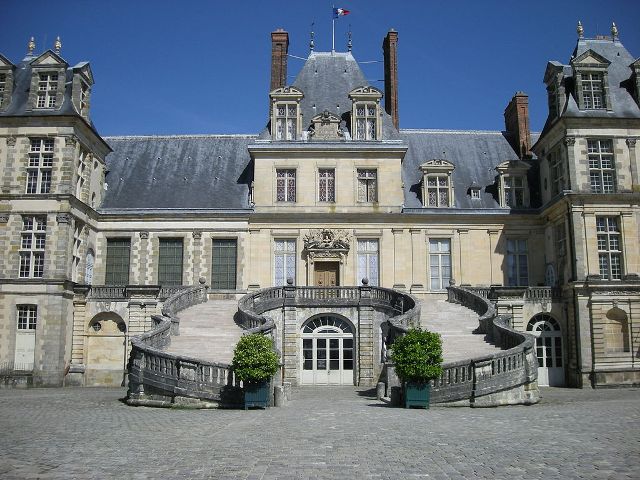 Location: Fontainebleau, in the Seine-et-Marne departement of France (Ile-de-France Region).
Built: 16th century.
Condition: In good condition.
Ownership / Access: State property.
ISMH Reference Number: PA00086975
Notes: Château de Fontainebleau is a castle in mainly Renaissance and Classical styles, adjacent to downtown Fontainebleau (Seine-et-Marne), some sixty kilometers southeast of Paris, France. The first traces of a castle in Fontainebleau date back to the twelfth century. The last work was carried out in the nineteenth century. Having high place in the history of France, the Château de Fontainebleau was one of the residences of French kings from François I (who dwelt favorite) to Napoleon III. Several kings left their mark in the construction and history of the castle, which is a witness and the different phases of the history of France since the Middle Ages. Surrounded by a large park and close to the forest of Fontainebleau, the castle consists of medieval style elements, Renaissance and classical. It shows the meeting between Italian art and French tradition as expressed in its architecture as in its interiors. This specificity is explained by the will of Francis I in Fontainebleau create a "new Rome" in which Italian artists are expressing their talent and influence of French art. Thus was born the School of Fontainebleau, who represented the richest period of the Renaissance art in France, and inspired the French painting until the mid-seventeenth century, and beyond. Napoleon nicknamed the castle and the "house of centuries", thereby evoking historical memories which places are the testimony.The castle is the subject of a classification as historical monuments by the 1862 list, ranking supplemented by several decrees issued in 1913, 1930, 2008 and 2009. Moreover, since 1981, the castle belongs with its park Unesco World Heritage. Boasting a prime architectural framework, the Château de Fontainebleau also has one of the largest collections of antique furniture from France, and holds an outstanding collection of paintings, sculptures and art objects ranging from life 19th century.

How To Get To Château de Fontainebleau (Map):