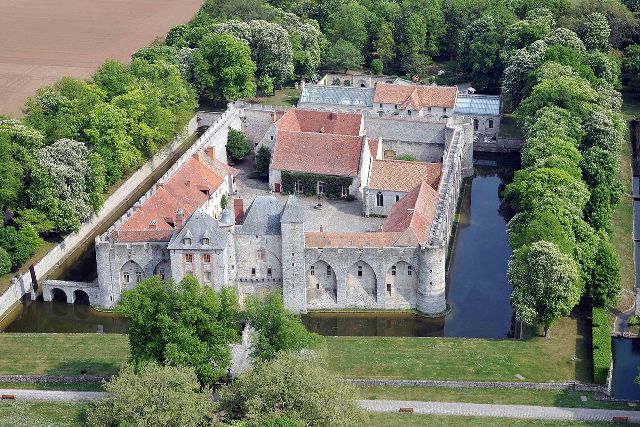 Location: Bouville, in the Essonne departement of France (Ile-de-France Region).
Built: 13th century.
Condition: In good condition.
Ownership / Access: Privately owned.
ISMH Reference Number: PA00087830
Notes: Château de Farcheville is a French château located in the French town of Bouville, in the former province of Gâtinais today department of Essonne and the region Île-de-France, forty seven kilometers south of Paris.According Dom Basile Fleureau, author in 1683 of Antiquities of the City and Duchy of Etampes, you could still read in 1667 on the door of the house of Farcheville an inscription attributing the construction of a "considerable castle" to Hugues II de Bouville (1240-1304), Baron de Milly, chamberlain of Philip the Fair in 1291. The chapel is mentioned in 1321. It is probably the one that has been preserved until today, decorated with murals and wood paneling couvrement are decorated with musical angels, which appears to date from the early fourteenth century. In 1407, the area between inherited in the possessions of the branch of Châtillon-sur-Loing from the house of Coligny, illustrates Protestant family that will keep for more than two centuries. It is looted and vandalized three times during the religious wars between 1567 and 1576 and restored between 1578 and 1604. Farcheville between the seventeenth century and eighteenth century in the heritage of rich families dress, Jappin then Maynon. In 1637 the manor was bought by Maximilian Jappin, counselor and secretary of the king. In 1741, the estate became the property of Vincent Michel Maynon, President of the Fourth Chamber of investigations to Parliament of Paris. Under the French Revolution, it could not prevent the demolition of about half of the arcs of the enclosure and a portion of slots. At that time, the drawbridge was already gone and ditches were called "cultivated". Work "without doubt important, though poorly documented" are made in the second half of the nineteenth century. A new car is especially resetting built in 1858 from drawings by architect Alphonse Adam. A major restoration campaign was undertaken in 1899, including the recovery of the entire wall, the construction of at least thirty-two slots and repair hangers. The main façade is fully dressed. The walkway resting on arcades date entire 1900-1901. The architect also performs Anjubert designs for the new fittings of the great hall and chapel.Major restoration still take place in the 1980s.

How To Get To Château de Farcheville (Map):