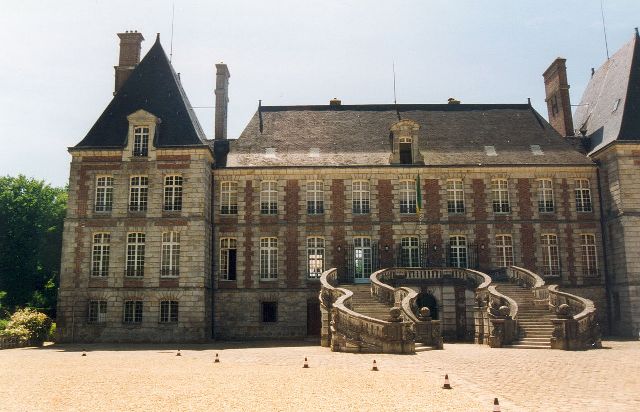 Location: Courances, in the Essonne departement of France (Ile-de-France Region).
Built: 17th century.
Condition: In good condition.
Ownership / Access: Owned by a private company.
ISMH Reference Number: PA00087871
Notes: Located at forty-seven kilometers southeast of Paris in the French Gâtinais and the department of Essonne Île-de-France, Château de Courances is a listed building since 27 June 1983. The park, considered as one of the most beautiful in France, was started in the sixteenth century by the Clausse and completed by Gallard in the middle of the seventeenth century. It is from this period that the aisle of honor between two channels and the great prospect in the center of the castle, with its canals and pools including a canal 248 fathoms of "plies" and a "room of water. " In the eighteenth century, the Marquise de Novion adds the mirror of water. In 1870 Destailleur transforms the English park in the park. The Marquise de Ganay, granddaughter of Baron Haber, did restore a drawing to the French with the help of landscape designer Achille Duchêne. It creates including the Horseshoe Basin and the Fountain of Arethusa, topped by a marble nymph carved in 1711 by Claude Poirier to the Marly Park (the statue was acquired in 2005 by the Louvre). In 1930, she created a garden "Anglo-Japanese." Gardens Courance - without final "s" - are described by Ernest de Ganay in Beautiful Gardens of France, dedicated to Lucien Corpechot. The castle park is labeled "Remarkable Garden".