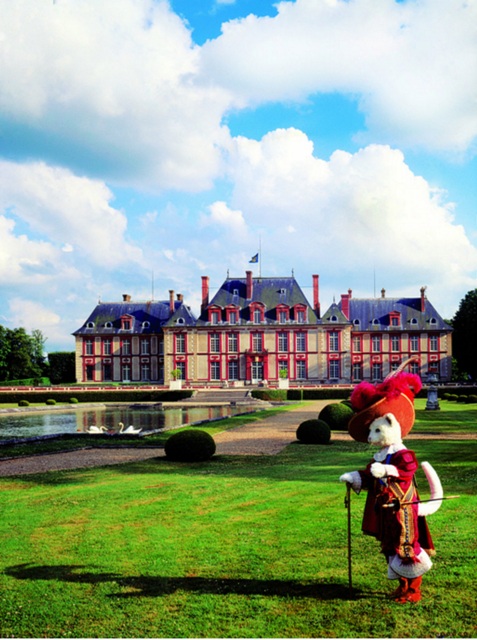 Location: Choisel, in the Yvelines departement of France (Ile-de-France Region).
Built: 16th-19th century.
Condition: In good condition.
Ownership / Access: Privately owned.
ISMH Reference Number: PA00087406
Notes: Château de Breteuil is a castle located in Choisel (near Paris), in the valley of Chevreuse, 35 kilometers south of Paris. The castle is a historical monument since 23 July 1973 and its park and gardens in the French and English are labeled "remarkable garden". Open to the public, it presents skits related to the view and the history of the castle, directed by wax statues made by the waxworks and automata made by Janie and Armand Langlois. Breteuil Castle features architecture of the seventeenth century, with a courtyard, fully enclosed by walls or buildings and lined ditches. On the front, two pavilions and a central angle passage body; in backyard, across the width, a large building whose central body was kept. The buildings are brick structure and filling in plaster. It is surrounded by French gardens and an English garden, where there is an orangery and a dovecote. The park covers 75 hectares. The castle is open to the public since 1967. castle royal collections include paintings, an eighteenth-century furniture. We discover a family whose ancestors are at the heart of history for four centuries. Fifty wax figures made by the Grevin Museum are staged in the lounges. The visit also allows to understand the lives of gentry throughout the ages with the visit of the rooms, the smoking room, the bathroom, the early twentieth century kitchens or stables with a collection of carriages. Seven Stories Charles Perrault are staged with a score of wax figures in the outbuildings.

How To Get To Château de Breteuil (Map):