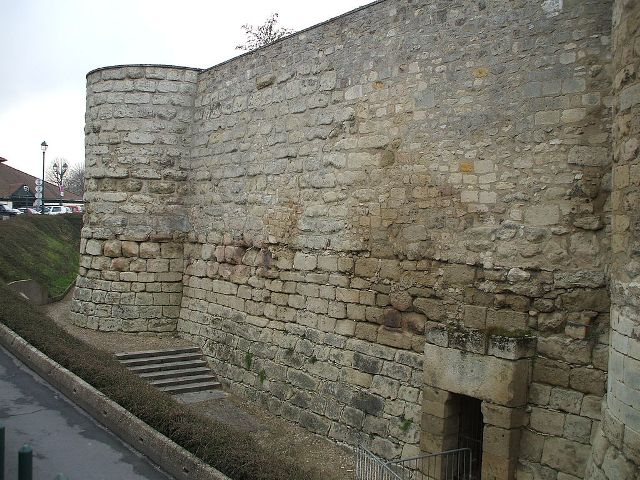 Location: Beaumont-sur-Oise, in the Val-d'Oise departement of France (Ile-de-France Region).
Built: 12th century.
Condition: Ruins.
Ownership / Access: Owned by the town.
ISMH Reference Number: PA00080229
Notes: Château de Beaumont-sur-Oise is a medieval castle, a historical monument in 1992.This former castle was one of the largest in the Oise valley. It is mentioned for the first time in 953 by Yves "old" in Pecq. It had a rectangular Romanesque keep with buttresses dishes twenty-five meters high and five wide. It was probably built by the Count Mathieu (1080-1155) to replace a previous castrum type of wooden structure built from the third century on this rocky outcrop. The city was organized and was structured around the castle, with the construction in the tenth century of the castrale collegiate and parish church. There was an apse chapel and a church of the twelfth century under the Holy Leonor priory, destroyed during the Revolution, and a Carolingian collegiate remaining. In 1226, Louis XI became Count of Beaumont and resided in the castle. The fortress was destroyed many times and rebuilt between the tenth century and the seventeenth century. During the Hundred Years War, the British occupied the city for forty years and the castle of 1420 and 1435. In 1432, the castle was demolished on the orders of the Duke of Bedford. In 1434, La Hire reconstructed but it will soon redémolit by John Talbot. In May-June 1590, during the siege of Paris during the religious wars, the castle and the town were besieged by the Huguenots. After 1 month of resistance about the Sieur de Pourtraincourt was forced to surrender. During the siege, the artillery caused significant damage to the towers of the fortress besieged by Henry IV. [Ref. necessary] In 1814, the castle ceased to be a military site.