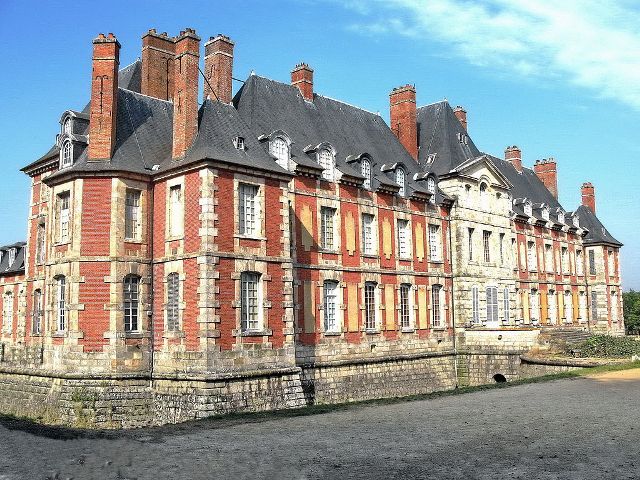 Location: Saint-Chéron, in the Essonne departement of France (Ile-de-France Region).
Built: 1625-1677.
Condition: In good condition.
Ownership / Access: Privately owned.
ISMH Reference Number: PA00087996
Notes: Château de Baville is a French château of Louis XIII style located in the municipalities of Saint-Cheron (the castle, outbuildings and two parks), part of the enclosure extends Breuillet and Breux-Jouy ( "wood du Boulay, "northeast part of the second park) in the department of Essonne and the region Île-de-France.Basville land was purchased in 1559 by Charles de Lamoignon (1514-1572). In place of the old manor house, his son Christian Lamoignon (1567-1636), adviser to the Parliament of Paris and ended his career as president with mortar, had built the present castle between 1625 and 1629 by Michel Villedo (1598 -1667), master mason of Louis XIII in 1629, which is the first known construction. This construction returns to sponsor the relatively reasonable sum of 45,000 pounds. Grand Siècle, the most select society frequent this area. Guillaume de Lamoignon (1617-1677), Marquis of Basville, which will Fléchier the funeral oration, is a friend of Racine, La Fontaine, Madame de Sevigne, Saint Vincent de Paul, Bourdaloue. This is Baville Boileau composed several of his works. Two wings, probably included in the initial plan, were built in 1677 for Christian-Francis Lamoignon (1644-1709), Marquis of Basville, General Counsel to the Parliament of Paris, respecting the original style. Common were built in 1769 for Charles-François de Lamoignon, respecting the original party while somewhat outdated. Lamoignon family retains ownership of the domain until 1791. The castle was acquired Ivry Rollin of marquis by Philippe Albert Joseph Pruvost said Saulty Saulty (1765-1833), Receiver General of Seine-et-Oise department and Regent of the Banque de France in 1817, who died at the castle November 25, 1833. The left wing was destroyed in the early nineteenth century, and the materials are used to build an orangery behind the right wing. It contained a rich library, now in the British Museum. In 1816, the French gardens are replaced with English gardens before being restored in the late nineteenth century, perhaps by Henri and Achille Duchêne. The castle was used as a filming location for the Boarding series aired in 2009 on M6.

How To Get To Château de Baville (Map):