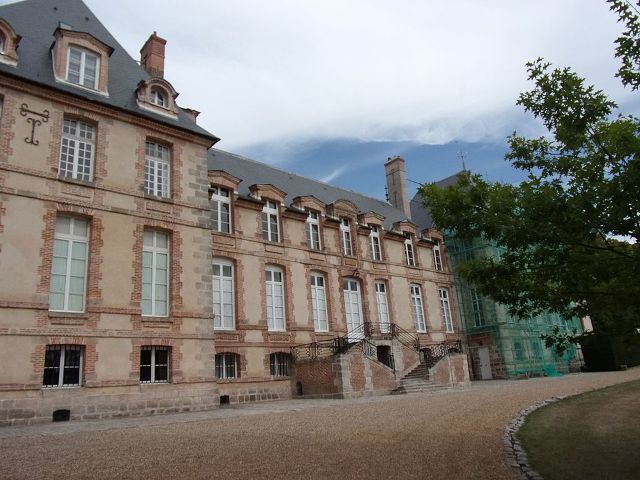 Location: Saint-Cyr-sous-Dourdan, in the Essonne departement of France (Ile-de-France Region).
Built: 1622.
Condition: In good condition.
Ownership / Access: Privately owned.
ISMH Reference Number: PA00087999
Notes: Château de Bandeville is a French château of Louis XIII style located in the municipality of Saint-Cyr-sous-Dourdan in the department of Essonne and the region Île-de-France. Built in 1622 for Thierry Sevin, President of the Parliament of Paris, it remained in the family of Pourtalès since its acquisition in 1806 by James Alexander Count Pourtales.In a place very formerly occupied by man, the stronghold of Bandeville is created after the Norman incursions. In 1236, Simon de Bandeville held in his stronghold simple fortified house with dovecote and garden. In 1530, Thomas Rappouël, notary and secretary of the king and of his room, superintendent of finances, acquires Bandeville and other strongholds in the following years. He enlarged the castle and created a park. Her daughter, Charlotte Rappouël († 1573), lady Bandeville, bringing the feud to the family of Drac by his marriage in 1536 with Adrien Drac (1509-1573), Viscount of Ay. The latter, without issue, transmits the fief to his nephew, Jean Drac, master of requests and advise the Parliament of Paris. Thierry SevinNote 2 († 1627), advisor to the Court of aid and President of the Second Chamber of Investigations of the Parliament of Paris (1612), married June 20, 1610 Louise du Drac, daughter of Jean Drac, becoming the master of Bandeville. It completes the formation of the area by purchasing in 1618 the fief of St. Cyr Tour. In 1622 he built the new castle in the Louis XIII style. In 1682 Bandeville was erected in marquisate in favor of François Bazin, master of requests, which transform the castle. Throughout the eighteenth century, the castle is still owned by large families of Parisian parliamentarians. In 1806, the estate was purchased by the James Alexander Count Pourtales (1776-1855). He has since remained in the family of Pourtalès, also became owner of the castle neighbor Marais by the marriage of Count Pourtales James (1911-1996) with Violette de Talleyrand-Périgord (1915-2003).

How To Get To Château de Bandeville (Map):