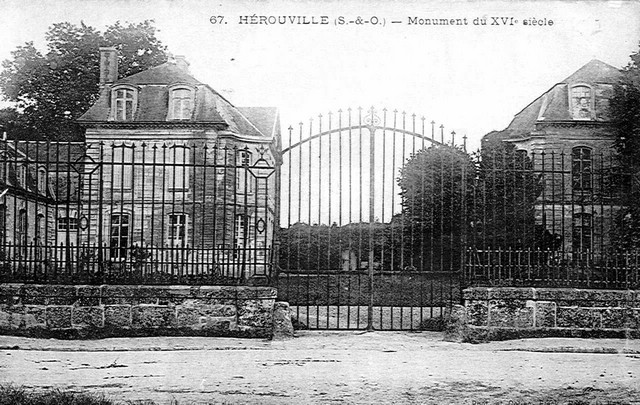 Location: Hérouville, in the Val-d'Oise departement of France (Ile-de-France Region).
Built: 18th century.
Condition: In good condition.
Ownership / Access: --
Notes: Château d'Hérouville is a mansion of the eighteenth century (1740) whose frame is composed of two wings, north and south, with floor, roof and side annexes. The two wings are connected by a high wall covered in ivy and pierced at its center with a wooden gate. This residence of thirty pieces was built on the site of an ancient castle destroyed. It is located in the small village of Hérouville on the RD 927 connecting to Meru Pontoise, Val-d'Oise, France. The castle is known for being a very famous recording studio that hosted during two distinct periods in its heyday, musicians and international singers and French between 1969 and 1985.Many families of the nobility residing in the stronghold of Hérouville-Auvers-Isles Adam. A number of knights and lords lived in Hérouville. Anne de Laval was the daughter of Guy XVI, Count of Laval and Anne de Montmorency, Dame Acquigny and Rochepot (1505-1554). Louis Sully was Lord of La Roche-Guyon (1557). The construction of the first castle was at the initiative of one Jean de Berbisy, only son of John Berbisy, originally from Burgundy, the fourth son of Henry, Esquire of Charles the Bold, who married May 17, 1544 Claude Sansac, heiress of the fief of Hérouville and Auvers. The Lordship of Hérouville was sold in 1680 to Louis Armand 1 of Bourbon, Prince of Conti1. Indeed, st Louis Armand de Bourbon, Prince de Conti at 18, married Marie-Anne, illegitimate daughter of King Louis XIV, age 13, legitimized in May 1667. The marriage was celebrated January 16, 1680 in Saint-Germain -in-Laye. It was the first wedding between a prince of blood and an illegitimate child of a king. Marie-Anne was called Mademoiselle de Blois (daughter Louise de La Valliere). The King's dowry amounted to a million pounds, and the Castle of Hérouville was purchased for the home of the couple. The marriage was happy the point insofar as, according to the story, the wedding night was chaotic ... Prince ended up being sent to the Hungarian front by King again after a jilted bride, he led a life of "debauchery." He returned from the front to cure "his sister" who had contracted a venereal disease and it is the caregiver that he himself caught and died quickly. Marie-Anne became dowager princess to her husband's death and ascended to an immeasurable wealth that allowed him to acquire a number of properties whose flag Blois Yvelines Bougival in which an architectural resemblance to the castle of Hérouville . The present castle was built in 1740 from plans by architect Gaudot School of Rome, on the ruins of the old manor of the couple. In the nineteenth century, it served as post office (between Versailles and Beauvais) and had probably stables located in the barn that is a dependency of the castle with a hundred horses, at the initiative of Achille Louis Brisay of husband Agathe Sedaine. Achille Louis Brisay was the mayor of Hérouville, Baron and Count, public prosecutor at the court, special commissioner, Knight of Malta. This was a man who had a taste for speculation, which led him to ruin. His property began to be sold after his death in 1855 (84 years). Then the castle was diverse and varied torments, partially demolished ... It was sold in 1861. The Duchess of Berry went there, Louis XVIII and Charles X made use of chariots. The castle was a meeting place and resort to the couple Frédéric Chopin George Sand.