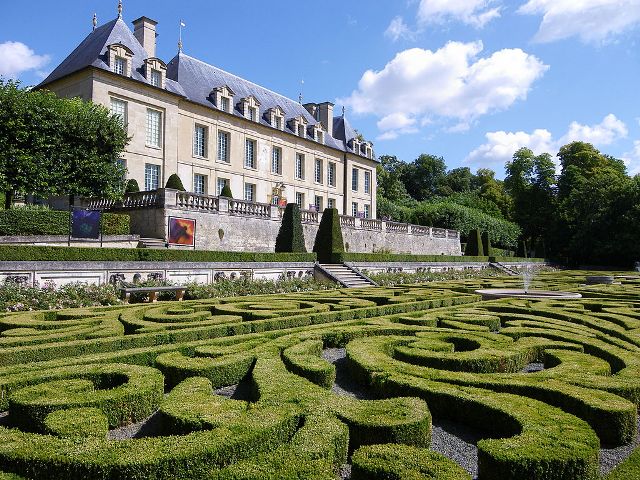 Location: Auvers-sur-Oise, in the Val-d'Oise departement of France (Ile-de-France Region).
Built: 1635-1756.
Condition: In good condition.
Ownership / Access: Private property.
ISMH Reference Number: PA00080229
Notes: Château d'Auvers (or Lery Castle) was built in the seventeenth century in Auvers-sur-Oise, Val-d'Oise. It is an example of original valuation of a heritage site in the heart of a village of international renown.The château of Auvers was built in 1635 by an Italian banker, Zaboni Lioni, the suite of Marie de Medici. At the end of the century, it becomes the property of Jean de Lery, the King's Advisor, which transforms the pavilion Italian in a castle in the French. Jean de Lery is both advisor, butler of the king, and Treasurer General of France. The estate is built in fief. In 1720, the castle belongs to the family of Espremenil. In 1756, the castle undergoes a complete transformation. The north side of Louis XIII style is maintained, but in the south, two additional pavilions is assistant there. In 1765 he was sold to Prince Louis François de Bourbon, who are staying only a few occasions and mainly during hunts. The only trace he left is his monogram on the nymphaeum. Subsequently, the owners changed several times, and buildings are deteriorating. In 1890, the castle will inspire Vincent van Gogh a famous painting, "The Castle of Auvers at sunset." In 1987, the General Council of the Val-d'Oise bought the whole site and fully restores. By decree of 23 July 1997, the facades and roofs of the castle; the entrance hall; the staircase with its staircase and ramp; and the entire park are registered as historic monuments. The south façade and French gardens will be completely redesigned from an engraving of the eighteenth century, with its boxwood embroidery and fountains. The castle opens its doors in May 1994 as a center of interpretation of art. There is introduced innovative original project: the interactive exhibition "Impressionist Time to Travel", designed and directed by Jean Saint Bris. This is to present the company in the second half of the nineteenth century to make the public understand how it has influenced the artistic practices and was born which was later the Impressionist movement. So it is a journey through reconstituted decors, works projected, accompanied by dialogue and music that recreate the atmosphere of the time. Indeed, Auvers-sur-Oise was one of scènees of the birth of Impressionism. Charles-François Daubigny, forerunner of Impressionism anchor his boat workshop to Auvers, soon joined by Corot, Pissarro and Cezanne, Van Gogh immortalized the village permanently.