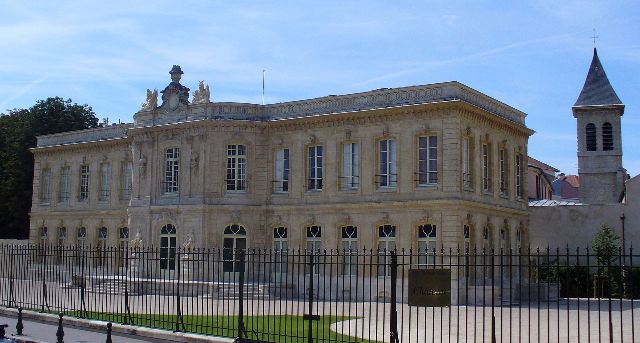 Location: Asnières-sur-Seine, in the Hauts-de-Seine departement of France (Ile-de-France Region).
Built: 1750-1752.
Condition: In good condition.
Ownership / Access: Owned by the town.
ISMH Reference Number: PA00088062
Notes: Château d'Asnières is located in the city of Asnieres-sur-Seine in Hauts-de-Seine, precisely at number 89 of the rue du Château.The castle of Asnieres, joined the stables located at the end of the field, with a capacity of 120 horsepower and called "general warehouse stud Asnieres" was in the middle of the eighteenth century, one of the most beautiful areas nearby from Paris. It reflects the artistic ambitions of Marc-René d'Argenson, Marquis de Voyer, who was able to gather there among the best artists and craftsmen of his time: Jacques Hardouin-Mansard Sagonne for architecture, Nicolas Pineau for ornaments, William II Coustou for sculpture, Brunetti and Jean-Baptiste Marie Pierre for painting, Jacques Caffieri for gilt bronzes. The gallery houses one of the finest collections of Flemish and Dutch paintings from the time, accompanied by the largest cabinet furniture. Recall that the coveted Marquis then instead of the Marquis de Marigny, Director of Buildings, Arts and Manufactures of the King, brother of Madame de Pompadour. He also intended to compete with the sumptuous mansions surrounding the Duke of Richelieu in Gennevilliers, the Duke of Choiseul in Clichy or his father, the Count of Argenson in Neuilly, and the Marquise de Pompadour, the enemy of the family, Bellevue . Acquired in January 1750 by the Marquis Amy Pictet, banker in Paris prosecutor Isaac Thelusson sent to the Republic of Geneva and the famous Swiss banker, to 75,000 books including 15,000 for furniture, the castle gradually became the heart of a vast domain. It will be made up until 1756 by the process of the long lease, it was with the approval of forced villagers. The Marquis did not hesitate and to annex part of the church to build a chapel. The architect had to show more of his designer talent in the Paris hotel of the Marquis in the 1760s. The fascination with the beauty of the castle of Asnieres was such that he served in the nineteenth century model of the mansion diamond Jules Porges, Avenue Montaigne in 1892 (destroyed in 1970), and the residence of US coal magnate Edward Julius Berwind, "the Elms" in Newport (USA) in the early twentieth century. The garden is classified as historical monuments by order of 9 June 1971, while the castle is classified in full since 18 July 1996. The Friends of the Castle and the Old Asnieres, created in 1978 by Asnierois (Ms Chabas and Stieffatre Messrs. Cassan and Rapeaud) has continued for 40 years to work for its total renovation. This was completed and inaugurated September 12, 2014 with the opening of the first floor.

How To Get To Château d'Asnières (Map):