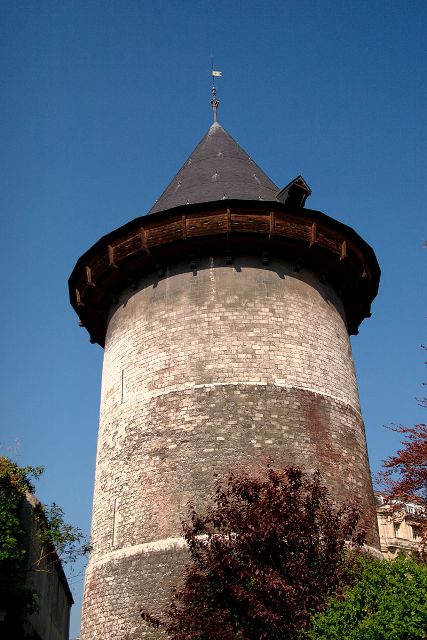 Location: Rouen, in the Seine-Maritime departement of France (Haute-Normandie Region).
Built: 13th century.
Condition: In good condition.
Ownership / Access: Owned by the Department.
ISMH Reference Number: PA00101011
Notes: Tour Jeanne-d'Arc (or "dungeon" and formerly "Big Tower") was the Rouen Castle main tower built by Philippe Auguste from 1204. This imposing building is the only remaining vestige of the castle elevation (the castle was dismantled from 1591 to the end of the religious wars). Jeanne-d'Arc turn the subject of a classification as historical monuments by the 1840 list.This dungeon was part of a meeting at the sentencing trial of Joan of Arc. She was threatened with torture and put in the presence of his torturers and torture instruments. Joan of Arc claimed: "Really, if you were me and to exclude members from the soul of the body, yes, I would say something else; and if I tell you something, after I always say that you would have told me the strength.Contrary to what she was not imprisoned in the dungeon, but in the tower of the Maid, now destroyed, the substructures are still visible at 102 rue Jeanne-d'Arc. On the building, a black marble plaque recalls this, as well as a sculpture of the castle. The courtyard of the building that has an easement has been designed according to these archaeological remains, which can still observe today.This is a massive tower built of local limestone, thirty meters high and four meters in diameter with walls four meters thick, pierced by a few narrow openings. It has three floors that had well-defined functions.sectional plane of Rouen dungeonThe conical roof was added during restoration work, carried out from 1866 to 1874 by the architect Desmarest, on the advice of Viollet-le-Duc.During World War II, the tower is camouflaged and transformed into bunker by German forces. The upper part of the tower is then concreted. Today, the tower is open to the public a museum. Among the collections: a painting entitled The Last Communion of Joan of Arc of the painter Charles-Henri Michel.

How To Get To Tour Jeanne-d'Arc (Map):