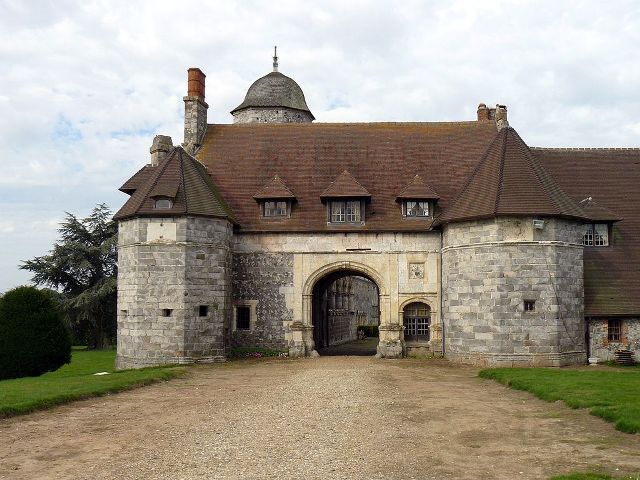 Location: Varengeville-sur-Mer, in the Seine-Maritime departement of France (Haute-Normandie Region).
Built: 1530-1545.
Condition: In good condition.
Ownership / Access: --
Notes: Manoir d'Ango is a Renaissance mansion, located in the town of Varengeville-sur-Mer, in the French department of Seine-Maritime, in Normandy area, and built by Jean Ango. It is a historical monument since 1862 on the list compiled by Prosper Mérimée.Jean Ango, owner, governor of Dieppe and maritime consultant of Francis I, the building was by Italian artists from 1530 to 1545. He lived as a summer residence until his death in 1551. From the east, he could see his boats go in and out of the port of Dieppe, which is no longer possible because of the many beech forests.Honoré de Balzac mentioned in his novel On Catherine de Medici as "the magnificent manor of Ango." Writers such as Louis Aragon and André Breton have stayed. André Breton is especially Nadja wrote the story during the month of August 1927.From 1928 to 1976, the mansion was the property of Mr.and Mrs. Hugot-Gratry who actively contributed to the restoration of the monument.

How To Get To Manoir d'Ango (Map):