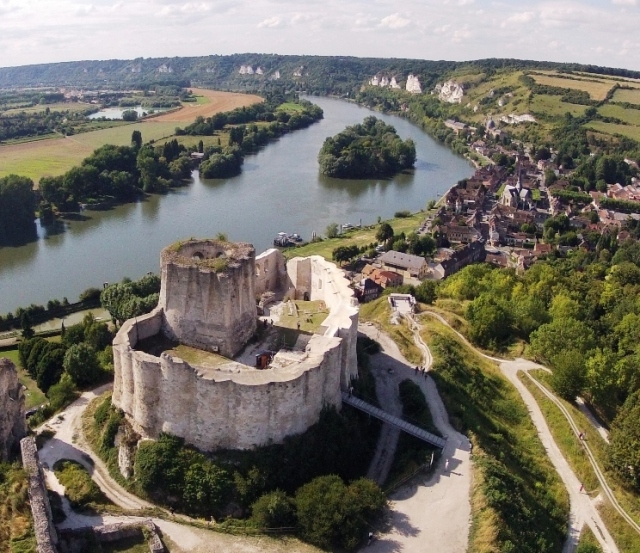 Location: Les Andelys, in the Eure departement of France (Haute-Normandie Region).
Built: 1197-1198.
Condition: In good condition.
Ownership / Access: Privately owned.
ISMH Reference Number: PA00099304
Notes: Château Gaillard is a ruined medieval fortress that is in the heart of Vexin Normand, 100 km from Paris in the town of Andelys (Eure). It is a piece of history of France overlooking the Seine valley, mixing Richard the Lion Heart and cursed kings on top of a limestone cliff. Chateau Gaillard has more than 800 years. It owes its name to Richard the Lion Heart, who completed the seer would have said "What an forecastle castle! The castle is the subject of a classification as historical monuments by the list of 1862. Various adjoining plots of land were also ranked in 1926, 1927 and 1928.The choice of Andelys by Richard poses two problems: firstly, the place belongs to the archbishop of Rouen, Walter of Coutances at the time; secondly, the King of England has no right to fortify the place under the terms of the Treaty of 1196. But he has no choice if he wants to defend the Seine valley. It therefore ignores the opposition. This earned him the wrath of Archbishop Walter of Coutances. Eventually a compromise was reached in October 1197 Richard offered the prelate several ducal lands against the possession of Andelys3, including the port of Dieppe, significant revenue source. The exchange was particularly favorable to the Church.

How To Get To Château Gaillard (Map):