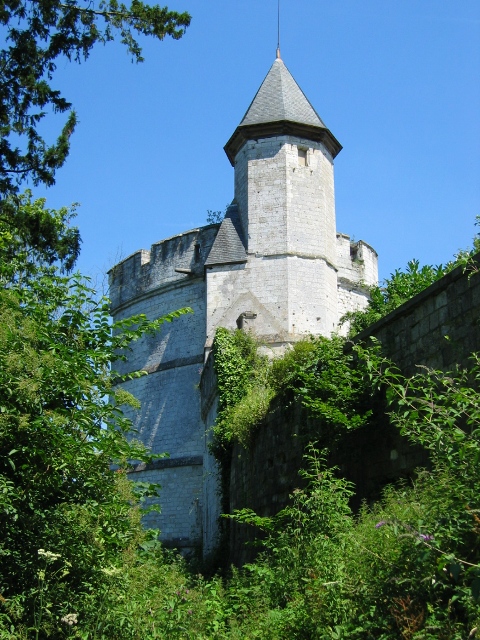 Location: Tancarville, in the Seine-Maritime departement of France (Haute-Normandie Region).
Built: 20th century.
Condition: In good condition.
Ownership / Access: Owned by a private company.
ISMH Reference Number: PA00101063
Notes: Château de Tancarville Perched on a cliff overlooking the Seine, Tancarville Castle dated eleventh century. The castle is the subject of a classification as historical monuments by the 1862 list.Raoul, chamberlain to the Duke of Normandy, built walls and the old tower. In the twelfth century is built the square tower with walls 1.65 meters thick. In 1316, Jeanne Tancarville, sole heiress, married John II of Melun. His son became the second earl of Tancarville, in 1364 the county of Tancarville is separate from that of Longueville. In 1417, the Countess Marguerite married Jacques d'Harcourt. In 1418 at the time of the conquest of Normandy by Henry V of England, the earldom of Tancarville, Earl of Tankerville is given to John Gray (John Grey), while in the kingdom of France was carried by the Harcourt family will recover the castle after the British left. In 1468 was built a ballroom. Then the son of the great Dunois will inherit in 1488. In 1505 the King of France Louis XII erected the Longueville County duchy of Longueville and Tancarville is only an annex county.In 1709, a classic in part is Assistant to the medieval parts of the building by the Count of Evreux. After 1789, the castle was looted and partly burned.In the 1960s, the castle served as a summer camp for children in the region.Currently the title of Earl of Tankerville is still worn in England.The castle now belongs to the Civile Immobilière de Figeac (Dordogne) SAQQARA capital of € 2,000, which offers since 2001 to develop luxury apartments there. While waiting to be rehabilitated, it remains closed to the public and parts deteriorate.