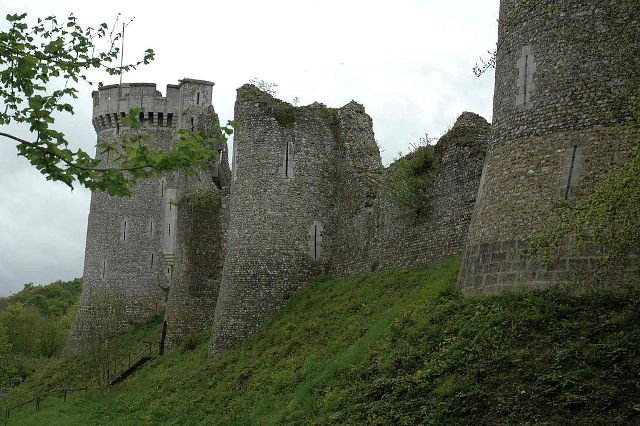 Location: Moulineaux, in the Seine-Maritime departement of France (Haute-Normandie Region).
Built: --
Condition: In good condition.
Ownership / Access: Private property.
Notes: Château de Robert le Diable the Devil castle dating back to the period of the Dukes of Normandy, is located in Moulineaux, near Rouen, next to the A13 motorway.It takes its name from Robert the Devil, according to the authors, means either Robert Montgomery or Robert the Magnificent, Duke of Normandy, father of William the Conqueror, without evidence of its construction by this character does exist. It is situated on a hill overlooking the Seine very high, and the view it extends throughout the Rouen region, making it a particularly strategic location. John Lackland would have built or expanded the castle between 1200 and 1203. Ditches were largely filled in 1855.Although highly altered and partly rebuilt by Lucien Lefort, a pupil of Viollet-le-Duc in 1905, the castle was classified as a site in 1935.Still half-ruined, it was bought, restored and furnished in the 1950s by Roger Parment, then mayor of Moulineaux with various memories and reconstructed scenes of local history and life in the Middle Ages with characters full-scale. A Norwegian style building housed until a little Viking ship reconstruction. It was open to visitors until 2003 and housed in the 1980 close to 50 000 visitors a year. Recently access is closed by a "private property" sign. The owners have taken it the Norman flag on the main tower.May 26, 2007, a fire destroyed the floors of the North Tower called "Rouen". The castle was bought by the Community of Rouen. A development program EUR 700 000 was launched by the agglomeration Rouen to reopen to the public the outskirts of château. The moat and the court, however, remain closed to the public except during the Heritage Days.

How To Get To Château de Robert le Diable (Map):