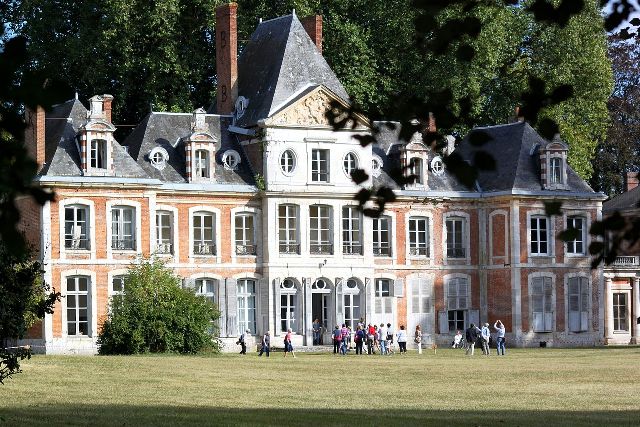 Location: Pinterville, in the Eure departement of France (Haute-Normandie Region).
Built: 17th-19th century.
Condition: In good condition.
Ownership / Access: Privately owned.
Notes: Château de Pinterville built between the seventeenth and nineteenth centuries, is located in the municipality of Pinterville in the department of Eure. It is documented in the general inventory of cultural heritage. The first mention of the mansion dating from 1204. Today destroyed, it would be more close to the Eure the present castle. In 1248, St. Louis gives the nephew of the bishop of Evreux John of the Court of Aubergenville, William of Aubergenville, the mansion and the land of Pinterville. In February 1260, Pierre de Meulan, son of Roger and cupbearer of Saint Louis, sells land Pinterville, from his wife Ligarde, the archbishop of Rouen Eudes Rigaud, for 3200 livres. The mansion became the residence of archbishops of Rouen, and in 1304, it meets the provincial council of Normandy, at the request of Guillaume de Flavacourt, which consisted of the Bishop of Avranches Geoffrey Boucher, Bishop Evreux Mathieu des Essarts, and the Bishop of Séez the Philippe Boulenger. In 1695, Suzanne Page Pinterville brings in the family The Weighing Boisguilbert. Its main body is built by Pierre Le Pesant, in 1680. In the eighteenth century, his descendants add galleries, corner pavilions and wings. And in 1840, the central pavilion is enhanced This castle was inhabited by Jacques-Henri Bernardin de Saint-Pierre. The castle passed to the Rostand family in 1878, which will retain for more than a century.