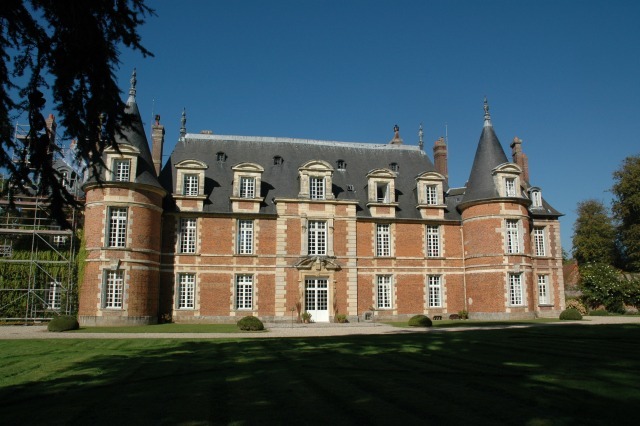 Location: Tourville-sur-Arques, in the Seine-Maritime departement of France (Haute-Normandie Region).
Built: 1590-1600.
Condition: In good condition.
Ownership / Access: Privately owned.
ISMH Reference Number: PA00101024
Notes: Château de Miromesnil is a historic mansion on the town of Tourville-sur-Arques, in the Seine-Maritime.The castle, owned by the family Dyel was destroyed in 1589 during the Battle of Arques.The current castle was built between 1590 and 1600 approximately. The original building includes the central part flanked by two turrets, extended a ground floor ends in the Henri IV style. The facades are modified in 1640 in the Louis XIII style.The owner in the second half of the eighteenth century is Armand Thomas Hue de Miromesnil (1723-1796), third Marquis de Miromesnil and Keeper of the Seals of France. He died in 1796. His goodness towards the local population and allows the family to the castle to spend the unhindered Revolution. Her eldest daughter, married to a lawyer of Rouen inherited the castle. The floors are added to the ends of the nineteenth century.The castle is successively rented and sold. It is the place of official birth Guy de Maupassant who was born there on August 5, 1850. Her family, which leases the premises to Baroness Marescot owner, residing there until 1853. It was bought in 1938 by nephews Eugène-Melchior de Vogüé. The castle is classified in 1942. In 1945, a fire destroyed the roof. The castle was bought in 2004 by Jean-Christophe and Nathalie Romatet, grandchildren Bertrand de Vogue.

How To Get To Château de Miromesnil (Map):