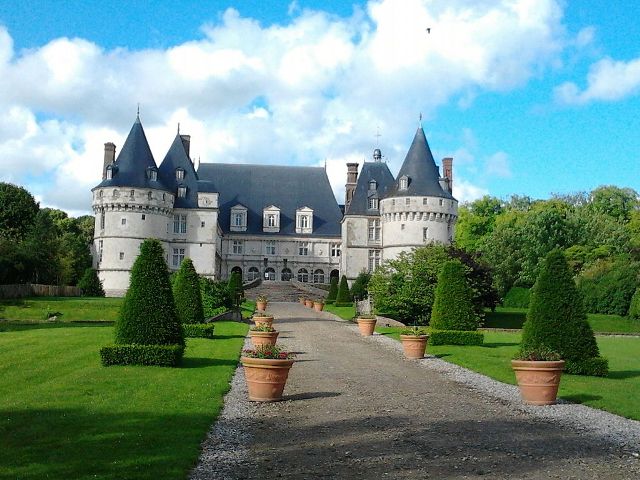 Location: Mesnières-en-Bray, in the Seine-Maritime departement of France (Haute-Normandie Region).
Built: 1546.
Condition: In good condition.
Ownership / Access: --.
ISMH Reference Number: PA00100751
Notes: Château de Mesnières is located Mesnières Mesnières-en-Bray (Seine-Maritime).In the nineteenth century, a wooden fortress surrounded by a palisade was built by Robert Mesnières, lord, to control the passage of an ancient Roman road and the Bethune Valley. Around 1200 the property passed to the family Valliquerville and Henri de Bailleul, cousin of the King of Scotland, and the family Boissay. The fortress was dismantled by the English in the fifteenth century. Charles Boissay began to rebuild the castle, inspired by the Renaissance architecture of the chateaux of the Loire; built forty years after his death his sister Suzanne oversee the work; the chapel was blessed in 1546. The castle became in 1590 the property of the family Fautereau; Louis Fautereau extended and embellished the castle by building including the chapel, the "Galerie des Cerfs", the ceiling of the "maps room" and "room Four Drums". In 1713 the family Durey Bourneville acquired the domain; after its fall in 1762 it was sold and exchanged by King Louis XV with Michel Charles Louis de Biencourt, Picard aristocrat. 6 Brumaire Year II, the castle was transformed into a prison, which will receive a total of 150 prisoners. He was considered the center of the village for centuries (according to Mayor Dany Minel in the nineteenth century, producing and selling electricity to the village, and the baker was at home. On 20 February 2004, the roof of the castle burned; to the fire, he hosted over 600 students from the sixth to the BTS, in technology, horticulture and forestry sectors. The castle is the subject of a classification as historical monuments by the 1862 list and the outskirts, a ranking in 1995.