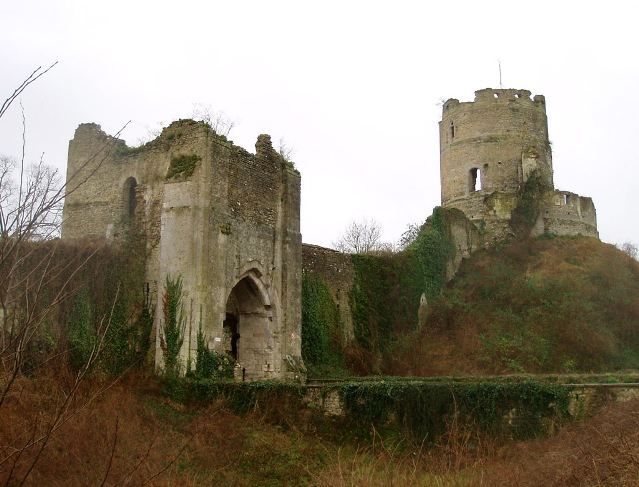 Location: Château-sur-Epte, in the Eure departement of France (Haute-Normandie Region).
Built: 1087.
Condition: In good condition.
Ownership / Access: Privately owned.
ISMH Reference Number: PA00099372
Notes: Château de Château-sur-Epte is an ancient motte founded in 1087 by the Duke of Normandy, William Rufus, whose remains stand in the town of Château-sur-Epte in the department of Eure and Haute area -Normandy. It was part of the ducal castle Epte controlling the border with the kingdom of France. Under Henry II of England, the castle was greatly fortified. The remains, developed and undeveloped, the whole castral subject of a classification as historical monuments by order of 16 June 1998.The castle has kept its structure of the nineteenth century consists of a large circular trenched platform about 70 meters in diameter; its connection with the tray is located a huge conical mound of almost 50 meters of ground diameter. This is a low mound-court set quite spectacular, originally crowned with palisades and a wooden tower. The backyard was surrounded during the twelfth century a wall pierced by two rectangular towers, doors, flat buttresses; doors are arch, the tray retaining some traces of a carved decoration, and jambs columns with capitals in the second half of the century. The scaled the wall of the root ball sides to reach its summit. Inside the yard was defined a set fortified by an inner wall closing on the top of the root ball; the entrance was secured by a gate tower of the twelfth century, doubled in the fifteenth century before a body drawbridge. At the side of the mound, a new wall, pierced by a gate tower, the court divided in two: it was built around 1180. It recognizes, leading outside an archer niche. At the top of the root ball is a circular main tower, very ruined; it is surrounded by a circular wall with strong original deadly tiny, maybe later. The tower, the first half of the twelfth century, had a noble level corresponding to the ground-floor access, decorated with Romanesque reinforcements; a screw was added into the thickness of the wall at the end of the century and a half level in the fourteenth century, pierced with a rectangular window topped with a trefoil. The site is characteristic castles motte and bailey among the most numerous and in pattern said pincer. The walls of the circular farmyard in two rounds has indeed doors close over the root ball to turn and mistress shirt.