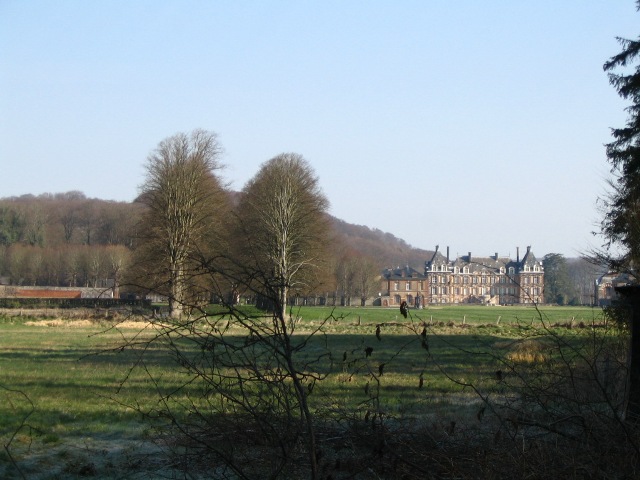 Location: Cany-Barville, in the Seine-Maritime departement of France (Haute-Normandie Region).
Built: 16th century.
Condition: In good condition.
Ownership / Access: Privately owned.
ISMH Reference Number: PA00100591
Notes: Château de Cany is a Louis XIII style castle located in the town of Cany-Barville, in Seine-Maritime, France. The castle is the subject of a registration as a historic monument since 1930. Château de Cany, in Normandy, Cany-Barville (Seine-Maritime). Rectangular 10 m by 45 m and on three levels, totaling approximately 1300 m ². It is made of brick, limestone rocks and sandstone. It is covered with a slate roof. It is surrounded by a large park of 50 hectares watered by the Durdent, which feeds into the moat. It was built between 1640 and 1646, commissioned by Pierre Le Marinier, a parliamentarian from Rouen, and according to plans by Mansart ,. Pierre Bec Hare and Anne-Christian de Montmorency-Luxembourg were then successively propriétaires5. In 2012, he belongs to Antoine Comte de Dreux-Breze. Since 1980, when it is uninhabited, it is open to the public every summer from 1 July until 31 August (except Fridays). You can admire, outside, gardens and, inside, all rooms are fully furnished for the construction. Until 2006 it was the scene of the annual competition coupling of Joan of Arc School.

How To Get To Château de Cany (Map):