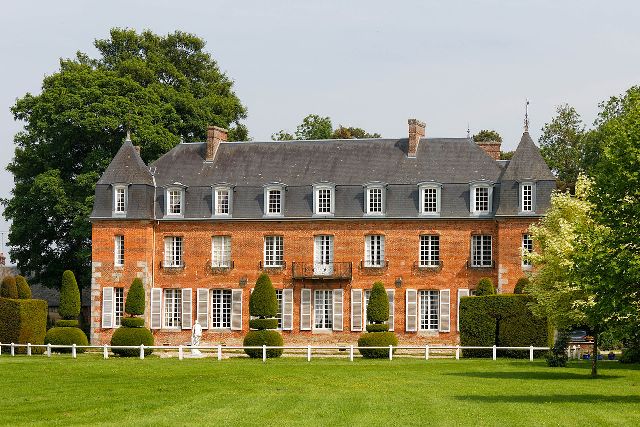 Location: Le Chamblac, in the Eure departement of France (Haute-Normandie Region).
Built: 16th-18th century.
Condition: In good condition.
Ownership / Access: Privately owned.
ISMH Reference Number: PA00099370
Notes: Château de Bonneville is located in the town of Chamblac in the department of Eure. It was the home of the writer Jean de La Varende from 1919 to 1959. He is the subject of a registration as a historic monument since May 9, 1978.The fiefs of Bonneville and Chamblac fall feudal barony of Ferrières, built in 1742 in the Duchy de Broglie (formerly Chambrais). In the fifteenth century, the Bonneville area belonged to the family of Bonneville. Jean de Bonneville, the king's chamberlain, is quoted in 1400 as lord of Chamblac and Bonneville. In 1464, during the search Montfaut, it seems to belong to Laurent Bonneville sergeant Chambrais. The castle is passed in this family until the eighteenth century. Based on a square mansion, is built a brick mansion, completely rebuilt under Louis XV, and equipped with mansard roofs. In 1765, it belongs to Jacques Edouard de Bonneville, knight, lord of Bonneville, last lord and boss Chamblac, died in 1806. He leaves to Nicolas, Count Bonneville, cavalry camp of Mestre, said "Gentil-Bo" died without issue. He had been a member of the nobility to the States General in 1789. This family was: Argent two lions passant gules.