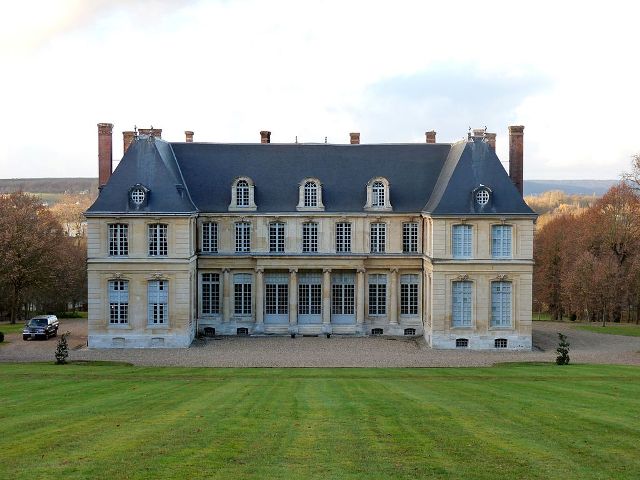 Location: Yville-sur-Seine, in the Seine-Maritime departement of France (Haute-Normandie Region).
Built: 18th century.
Condition: In good condition.
Ownership / Access: Privately owned.
ISMH Reference Number: PA00101093
Notes: Château d'Yville is located Yville Yville-sur-Seine (Seine-Maritime), bordering the Seine.A true architectural gem such as Normandy contains innumerable, Castle Yville rises in the municipality of Yville-sur-Seine. This is a beautiful house built in 1708 on "attributed" plans Mansart. The architect Jean-Jacques Martinet who gets the work between 1723 and 1735. He will choose for this beautiful stone outcome limestone size of the region, with brick and wood filling stone and timber framing. Let us not forget that girls marry Martinet in 1765 a member of the family Goujon Gasville, from Yville-sur-Seine ... lords! One understands that he put all his knowledge there to shine with one of his relatives by marriage.This is the thirteenth century that the tradition dates the foundation of a chapel in Pouillé, home of William of Yville. In 1407, Jacques de Trie makes confession to the king to the manor house of Yville with a dovecote, barns, stables and gardens. This mansion was destroyed in 1708. From 1720 to 1723, the castle belongs to the financial Yville John Law. In 1708, François Le Menu de La Noë started to rebuild the house but left unfinished. The auction is continued for the benefit of Prosper Goujon, Marquis of Gasville in 1723. The expertise conducted by Gilles Hue, architect in Pont-Audemer, indicates that the castle started measured 66 feet by the front of the garden. Everything was neglected and must be repaired two small staircases to exit the courtyard to go to the garden of honor, repair the joint, the yards. The gardens are in very poor condition: 300 trees and 6 squares are detected near the dovecote. The avenues of the courtyard disappeared. That same year, 1723, the visit takes place in the chapel of the solidly built castle, far from the remains of 150 feet with 40 feet long on 20 wide, 4 large windows, two of Mauny wood side and two side the Seine, paneled in pine, ceiling or roof of plâtre1: "It is located in the courtyard." Reconstruction is entrusted to Martinet as the quote written by Flambart steward Yville while being looked after replant the garden. The set is almost finished in 1735 (it is still in the slate roofing tiles and windows). Prosper Goujon Gasville moved there in 1742. The iron railing for the staircase was commissioned in 1766 to Louis Gerome Hegaux, master locksmith in Caudebec.In the twentieth century, the property belongs to the family of Moors Malartic.In 1943, he serves as a command post in the 21st Panzer Division and the 9th Panzer Division.The castle is the subject of a registration as a historic monument since October 7, 1931.

How To Get To Château d'Yville (Map):