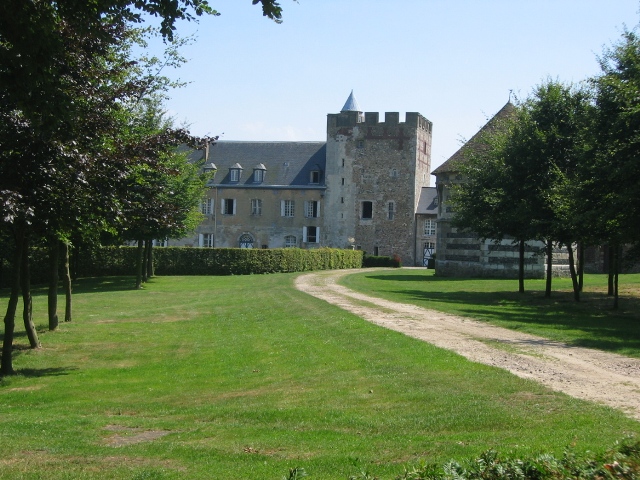 Location: Gonfreville-l'Orcher, in the Seine-Maritime departement of France (Haute-Normandie Region).
Built: 12th-19th century.
Condition: In good condition.
Ownership / Access: Owned by a private company.
ISMH Reference Number: PA00100674
Notes: Château d'Orcher is located in the municipality of Gonfreville l'Orcher, in the department of Seine-Maritime. The feud was erected by the Duke of Normandy for Auricher family, who built a castle with a chapel Sainte-Honorine The castle is built in the twelfth century on top of a cliff to protect the entrance to the Seine. The keep was partially destroyed in 1360 by troops of Harfleur. After was rebuilt, the English take in 1415. Henry V of England dispossessed in the Crespin family to Jean Falstaff. The field of Orcher visited the Duke of Bedford in 1434, but returned in Crespin in 1449. He spent the last Breze by inheritance in 1488, then to the family of O in 1539. The Potter family owns from 1632 to 1719, when the financial John Law acquires. He then goes to Philippe de Vitry and Thomas of Planterose Melmont in 1735. He does transform the castle to the taste of the eighteenth century by François de la Motte, and Jacques Lesueur Courtel. The great northwest tower and two north towers are removed with the curtains. The castle is owned by the family of Rochechouart in the nineteenth century, which restore the architect Philippon. It now belongs to the family of Harcourt. The monument is the subject of a classification as historical monuments since February 12, 1976 and an inscription on the same date.

How To Get To Château d'Orcher (Map):