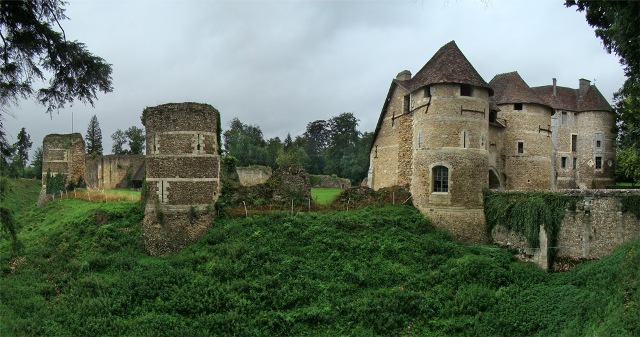 Location: Harcourt, in the Eure departement of France (Haute-Normandie Region).
Built: 12th-17th century.
Condition: Ruined.
Ownership / Access: Owned by the Department.
ISMH Reference Number: PA00099443
Notes: Château d'Harcourt is located on the territory of the town of Harcourt in Normandy (France). It is a model of medieval architecture, whose origin is linked to the Harcourt family. It has one of the oldest arboretums that one can find in France. The building has preserved intact much of its original structure. It is the subject of a classification as historical monuments by the 1862 list.If the first Harcourt lords appear in place around the year 1000, it was only in the second half of the twelfth century that the existence of a castle is proved by the texts. Robert II of Harcourt is the companion crusade of Richard the Lion Heart. It is certainly he who built the first stone castle. The Harcourt are therefore among the most important of Normandy barons. Jean II d'Harcourt was appointed Marshal of France by example and welcomes her home King Philip the Bold. In 1338, another King of France, Philip VI of France, erected the lordship of Harcourt in county; the castle became the county seat. The fortress besieged rarely appears in history. Only during the Hundred Years War that Harcourt becomes a military issue. In 1418, he went to the English but they are expelled by the Dunois counts, Eu and Saint-Pol in 1449. At the end of the war, the field returns to the family Rieux then from the second half of the sixteenth century to the powerful house of Guise-Lorraine. The religious wars forced to surrender in defense of the castle. In 1588, the Leaguers occupy. In the seventeenth century, it loses any military interest. It is even almost abandoned and overgrown when lovers of old stone Louis Gervais Delamarre acquired it in 1802. At his death, he bequeathed Harcourt at the Royal Academy of Agriculture. The latter sells by deed of gift the castle and the arboretum in the Department of Eure. Since 1 January 2000, the General Council of the Eure is the owner.

How To Get To Château d'Harcourt (Map):