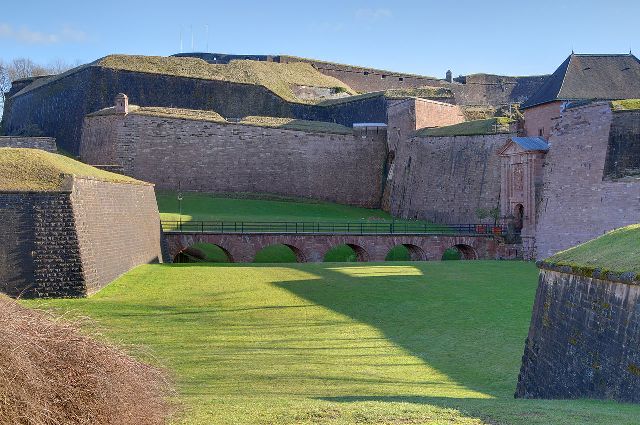 Location: Belfort, in the Haute-Saône departement of France (Franche-Comté Region).
Built: 17th century.
Condition: In good condition.
Ownership / Access: Private property.
Notes: Citadelle de Belfort fortifications begun by Vauban, completed after 1687 is one of the main monuments of the city of Belfort. It overlooks the city from a limestone rocky promontory erected in the middle of the Belfort Gap. It includes, besides all the fortifications and ditches, a masterpiece on the western flank of the Haxo barracks: the Lion of Belfort, built in 1880 by Bartholdi. The citadel is the subject of multiple protections as historical monuments ranked 23 October 1907 (Brisach door) modified ranked August 20, 1913, a ranking March 6, 1923 (advanced scale: advanced bastion B, external walls and coverage of the bastion wall of the wall and its cover up the bastion B at the gate of Brisach, wall rampart and its cover from the door of Brisach to the castle moat that complement the seventeenth century defense system), registration August 13, 1993 (power canal covered) and a ranking April 29, 1997 (All works constituting the castle and its fortifications).

How To Get To Citadelle de Belfort (Map):