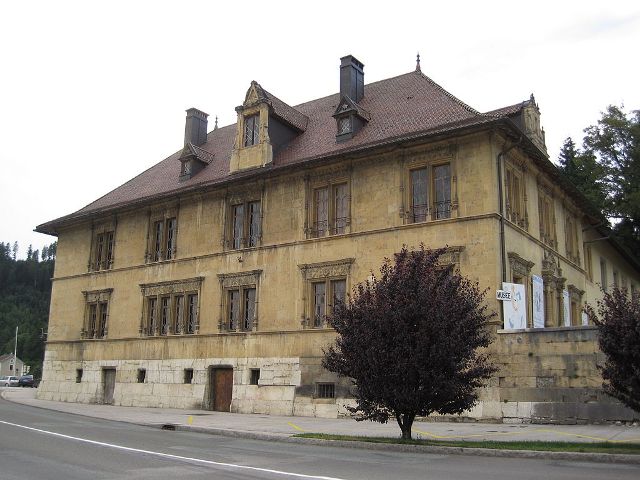 Location: Morteau, in the Doubs departement of France (Franche-Comté Region).
Built: 1576.
Condition: In good condition.
Ownership / Access: --
Notes: Château Pertusier is a Renaissance castle of the sixteenth century Morteau in the Haut-Doubs in Franche-Comté. It is classified as historical monuments since July 5, 1993 and houses the clock museum Morteau since 1985.In 1576 the Pertusier castle built by William Cuche (one of the oldest families of Morteau Valley, a native of Switzerland) 17 rue de la Glapiney in Morteau (rare example of civil Haut-Doubs Renaissance architecture).In 1647 the Cuche family ceded the castle to John Bôle (from Switzerland), which transmits to his descendants. In 1797, during the French Revolution, the castle became national property and sold lawyer Jean-Charles Besançon Pertusier (1754-1822). In 1935 René Pertuisier (down from above) sells castle and park in the municipality that houses a police between 1938-1985. Since 1985 the castle houses the Museum of watchmaking sausage.