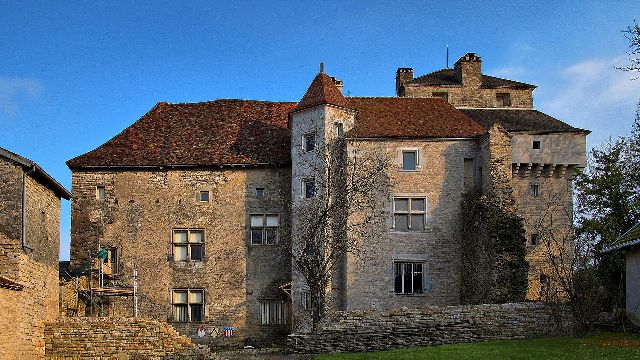 Location: Vallerois-le-Bois, in the Haute-Saône departement of France (Franche-Comté Region).
Built: 12th-16th century.
Condition: In good condition.
Ownership / Access: Privately owned.
ISMH Reference Number: PA00102281
Notes: Château de Vallerois-le-Bois is a castle located in the territory of the French town of Vallerois-le-Bois in the department of Haute-Saone and Bourgogne-Franche-Comté region. It was built in the twelfth century and significantly modified in the following centuries; partly destroyed during the Revolution, it retains architectural elements of the sixteenth and seventeenth centuries. Private property, it is since 1992 the major restoration object.Tradition says that the lordship of Vallerois belonged in the twelfth century to the Cicon family, related to the powerful family of La Roche, a native of Doubs. In any event, the lords of Vallerois-le-Bois are mentioned in documents of 1273 and 1414. The oldest remaining elements of the castle date from the fourteenth century.