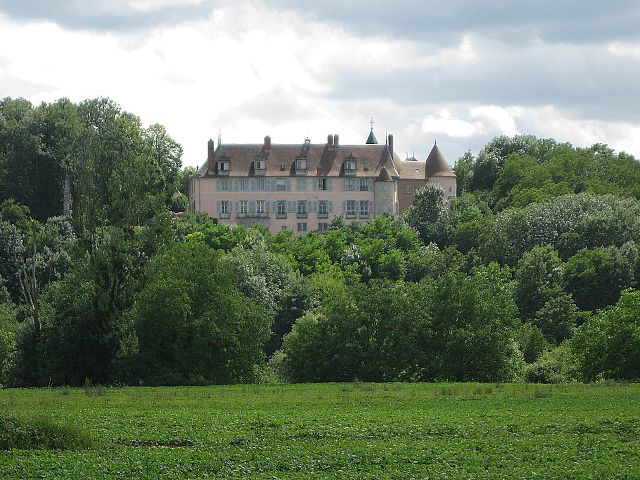 Location: Torpes, in the Doubs departement of France (Franche-Comté Region).
Built: 18th century.
Condition: In good condition.
Ownership / Access: Private property.
ISMH Reference Number: PA00101730
Notes: Château de Torpes built on a rock 20 meters high, the edge of Doubs is a castle located in Torpoint, in the French department of Doubs.The eighteenth century to the fifteenth century, the castle's history is closely linked to lords and lords of Montferrand. It is part then a set of fortifications belonging to them, including those of Montferrand-le-Château, Thoraise, Corcondray, Fourg and Avanne. In 1333, it was acquired by William of Thoraise (from the family of the lords and the lords of Montferrand (Montferrand-le-Château), important person who participated in the negotiations between the King of England and the Dukes of Burgundy, during the hundred Years war. in 1492, the castle was burned by Maximilian, in punishment of support from the lady to King Louis XI. the line disappears in 1494, the death of the "Lady of Torpoint" (Claude Thoraise). In 1735, the castle still has its medieval appearance, but in the second half of the eighteenth century, the architect Joseph Galezot made him undergo major alterations that make it lose its original appearance feudal followed by other more minor in the first third of the nineteenth century. The famous writer Voltaire would have stayed because of a love affair with the Marquise du Chatelet, parent of lords. After the French Revolution, the castle of Torpes is sold to a ironmaster, Saint Charles, and remains in the possession of this family until our time. From the history of the castle, the kitchen and the foundations of the corner towers of the thirteenth century, facades, roofs of the main building, the entrance gate, the lower room and woodwork of the Louis XVI lounge will be enrolled in Inventory of Historical Monuments in 1949. the first protection is replaced by entry in 1992 of the facades and roofs of the farm and the garden fence and wall in 1993 by the rankings Historical Monuments of the main building, the small hotel and other elements such as regular garden with driveway, his orchard, pond, the courtyard and terrace, gates, railings, hydraulic components and other interior elements (fireplace eighteenth century example) .The castle is private property.