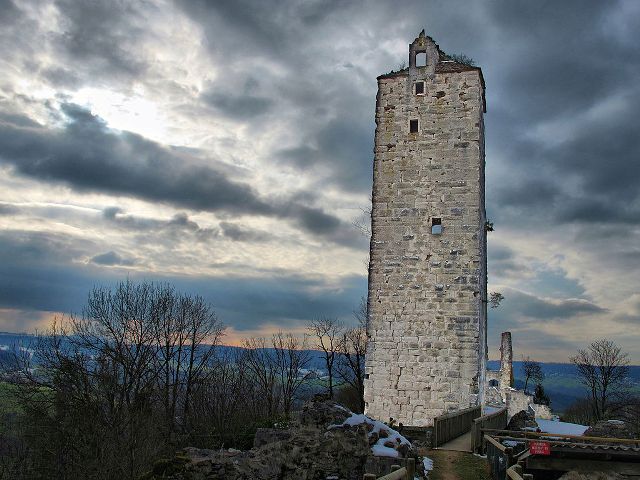 Location: Chassagne-Saint-Denis, in the Doubs departement of France (Franche-Comté Region).
Built: 11th century.
Condition: Ruins.
Ownership / Access: Private property.
ISMH Reference Number: PA00101623
Notes: Château de Scey (or castle or manor Saint-Denis Saint-Denis) is a protected historical monuments castle, located in the towns of Chassagne-Saint-Denis and Cléron in the French department of Doubs.An occupation of the castle site is attested from the tenth century, although various shards found at the site show a fixed or temporary occupation well before this époquerch. The castle is first mentioned in 1083 The first tower, called Saint-Denis tower still standing today, was built in 1166 by Pierre de Scey, named Burgundy County keeper by Emperor Frederick I. A second tower called Montsoufflot tower, now defunct, was built at the end of the rocky outcrop after 1179. The castle and the town were once looted by the troops of Louis XI in 1479 or 1480. German Emperor Maximilian authorizes refortification the castle in 1494 and in 1550, Nicolas Perrenot Granvelle bought the site to rebuild between 1565 and 1576. In 1674, the castle was finally destroyed. By decree of 16 March 1934, the site contains the ruins of the castle is classified and April 6, 1987, the castle ruins, the forecourt and basement corresponding to the entire assembly of the ruins of the castle are classified as historical monuments.