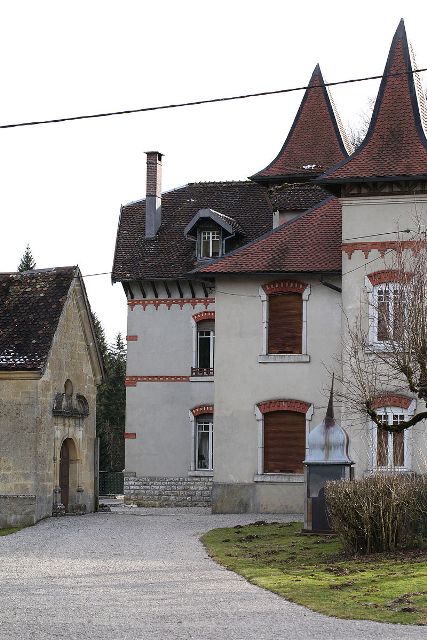 Location: Pontarlier, in the Doubs departement of France (Franche-Comté Region).
Built: 17th century.
Condition: In good condition.
Ownership / Access: --
Notes: Château de Sandon (or remains of Sandon), is an area protected historical monuments, located in Pontarlier, in the French department of Doubs.The original date field seventeenth, eighteenth centuries as evidenced by the chapel, and was originally a scierie. The derivation of the Doubs still exists. Purchased in the early nineteenth century by the mayor of Pontarlier at the time, Philippe Demesmay, it is still owned by the family. The mill was rebuilt in 1846 and a bridge spanning the Doubs was built in 1879 and taken in 1882. In 1910 the main building was built in a regional style, typical of the early twentieth century. Many elements of domainenote are registered as historical monuments in 2003.