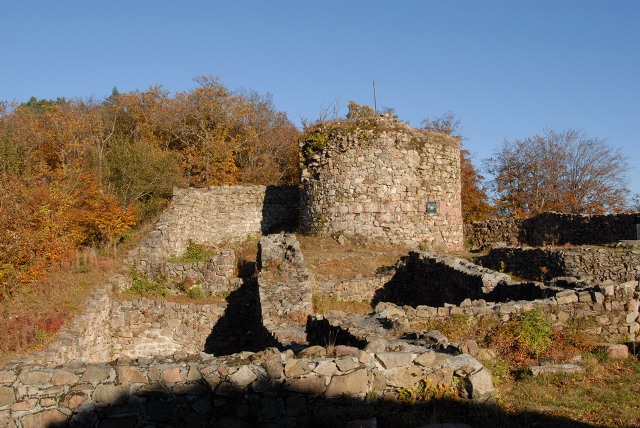 Location: Rougemont-le-Château, in the Haute-Saône departement of France (Franche-Comté Region).
Built: 12th century.
Condition: Ruins.
Ownership / Access: Private property.
Notes: Château de Rougemont is a small fortress built in the twelfth century in southern Vosges massif defensive purposes. It is the subject of a registration as a historic monument since July 4, 1996.This fortress, which belonged to the Counts of Ferrette, was built in the late twelfth century to protect a Roman road from Langres, along the Vosges and passes through Rougemont-le-Château. The castle had to monitor the south gate of Alsace and symbolize the power of the lords of the region. At the extinction of the line in 1324, it goes through inheritance to the Habsburgs.The castle burned and destroyed at the end of the fourteenth century by Enguerrand of Coucy.Excavations began in 1977 and preceded a complete restoration of the castle. The important military equipment, civil and religious revealed by the excavations is preserved at the Museum of Belfort. The visit to the fort is free and open, but not easy to access.