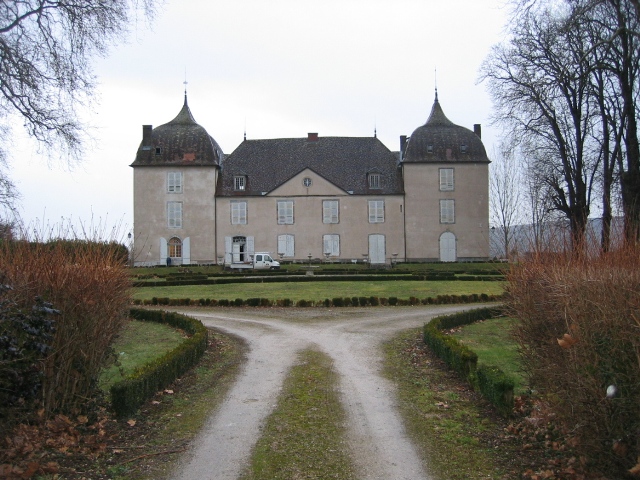 Location: Arc-et-Senans, in the Doubs departement of France (Franche-Comté Region).
Built: 1756.
Condition: In good condition.
Ownership / Access: Privately owned.
ISMH Reference Number: PA00101439
Notes: Château de Roche-sur-Loue is a castle of the eleventh century completely rebuilt in the eighteenth century in classical style castle in Roche-sur-Loue (hamlet in the municipality of Arc-et-Senans) in Burgundy, Franche County 30 km southwest of Besancon. This private castle is in perfect condition, registered historique2 monument since 1974, and not open to tourism.In the Middle Ages, the cities of "Rainbow Valley" (Arch in Valley of Loue) and Sonans (now Arc-et-Senans) belong to the Lord of Salins, vassals of Burgundy County and protected by two houses -fortes: Roche-sur-Loue east and Château-Rouillaud, burned in 1638, to the west. In 1080, the manor and the original fortress of Roche-sur-Loue Étiennette belong to the Countess of Burgundy (wife of Count William of Burgundy and mother of Pope Callistus II). The castle locks a communication node on the "Jura salt road" and a ford on the Loue. It consists of a large fortified tower, located at the site of the current gate. After 1615, the area belongs to the family of Brown in 1694 that gets to be high in Marquisat. In 1756 the Marquis de Grammont (previous heir) made entirely reconstruct the elegant castle between two square towers with roof at the Imperial on the original fortress. The Royal Saltworks of Arc-et-Senans was built next to Arc-et-Senans in 1775. As there is no salt in the basement of this village is the huge wooden resource heating the Chaux forest determines the choice of this place, where the first salt quintal produced in 1779. In 1864, Amédée Caron turns again the castle and implements an industrial activity in the area. Since 2009, this is a house style offering 4 guest rooms and one suite.