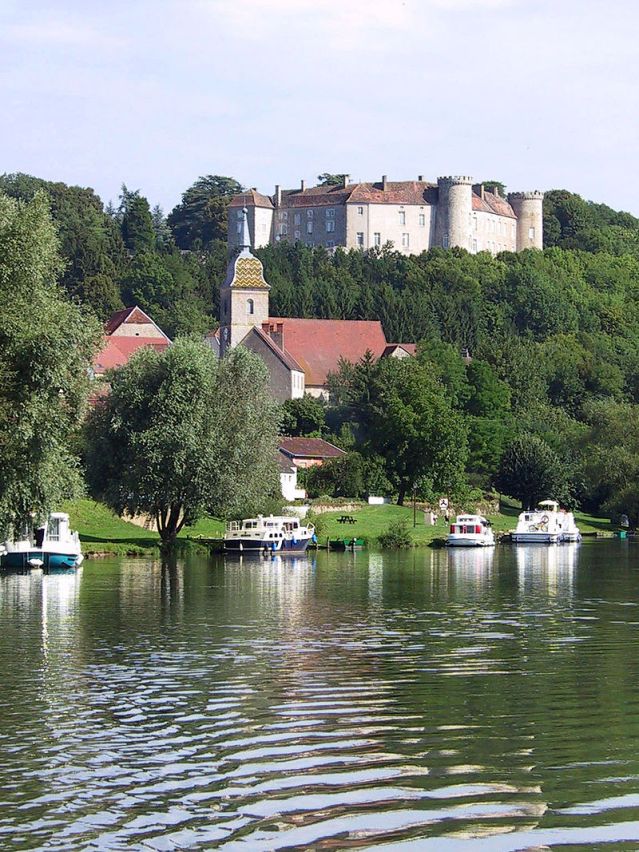 Location: Ray-sur-Saône, in the Haute-Saône departement of France (Franche-Comté Region).
Built: 10th-18th century.
Condition: In good condition.
Ownership / Access: Privately owned.
ISMH Reference Number: PA00102258
Notes: Château de Ray-sur-Saône is an ancient castle dating from the tenth century, rebuilt in traditional style in the eighteenth century, located in Ray-sur-Saône in Burgundy, Franche-Comté (classified village "Little Comtoise Town of character"). The castle belongs to the department of Haute-Saône, for a donation of 29 May 2015. It is in perfect condition and the park is open to visitors during the tourist season. It is the subject of a classification as historical monuments since November 2009. It is the subject of a registration as a historic monument since 1978.In the nineteenth century the village belonged to the abbey of St. Vincent de Chalon-sur-Saône, the Lords of Ray being the head of the lordship and ensuring the defense. Then the Abbey of Saint Vincent de Chalon-sur-Saône gives way to the counts of Burgundy in the thirteenth century, who recognize the entire property to the Lords of Ray to 1270.At the end of the twelfth century, Othon de la Roche Castle La Roche became marriage by Ray Baron with his cousin Isabelle Ray (daughter of Guy Lord Ray).The castle is built, according to tradition on an old Gallo-Roman settlement. Perched on a rocky outcrop overlooking the Saône fifty meters, the castle has 14 towers originally (largest fortress of Burgundy County in the Middle Ages) on an area of ​​8 hectares. The French-landscaped park will be planted with time of tree species from around the world: cedar, linden, pagoda trees, spruces, pines, Foyards, sycamore, ash and chestnut.The castle is heavily damaged during the Ten Years' War (an episode of the Thirty Years War) and then razed in retaliation for the asylum offered to Gaston d'Orléans in Comté then rebuilt in its present form at the end of seventeenth century and eighteenth century on the foundations of the original medieval fortress.The castle passed into the family of the Dukes of Marmier-Choiseul and that of Salverte by marriage of Gabrielle Marmier with Count Hubert Salverte. The couple's daughter, Countess Diane-Regina Salverte, gives the castle to the department of Haute-Saône 29 May 2015. Diane Salverte was the 33rd generation to inhabit the castle.

How To Get To Château de Ray-sur-Saône (Map):