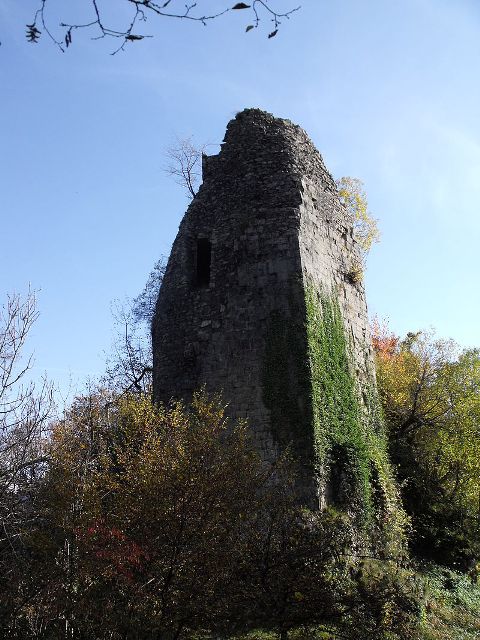 Location: Montjoie-le-Château, in the Doubs departement of France (Franche-Comté Region).
Built: 13th century.
Condition: Ruins.
Ownership / Access: --
Notes: Château de Montjoie-le-Château is a ruined castle, protected historical monuments located in the town of Montjoie-le-Château in the French department of Doubs.The castle was built in the late nineteenth century by the family of Glère, probably by Richard I of Glère, rocheux1 on a spur on the site of a Neolithic camp. The castle was the center of the lordship and barony of Monschau. At the beginning of the ten-year war, in May 1635 the French troops commanded by Marshal of the Force, besieged the castle of 12,000 men. After three weeks of sieges and battles, the defenders surrendered. The French troops then undertook to dismantle and burn the town, castle and walls leaving only the intact chapel. January 27, 1934, the site contains the ruins of the castle and is filed July 24, 1985, the castle ruins, substructures, the chapel and the archaeological remains are registered as historical monuments.The site is spread over 85 ares of a trapezoidal shape closed by a semicircular edge of 11 meters. The site included the stately home, the lodging for the garrison, chapel, towers, all surrounded by two thick walls. At the height of the spur stands the keep much of which is still standing. walls of the remains are still visible, as well as the chapel.