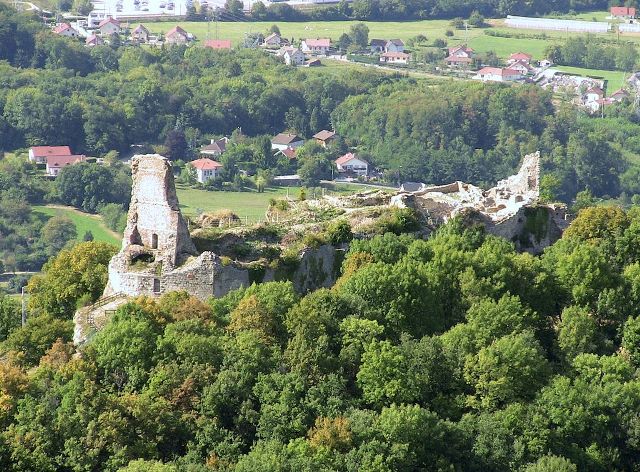 Location: Montfaucon, in the Doubs departement of France (Franche-Comté Region).
Built: 11th century.
Condition: Ruins.
Ownership / Access: Owned by the Town.
ISMH Reference Number: PA00101686
Notes: Château de Montfaucon is a castle (in ruins) Montfaucon near Besancon, in Bourgogne-Franche-Comté, dating from the eleventh century that belonged to the powerful family of feudal lords of Montfaucon. It is the subject of a registration as a historic monument since December 7, 1976.The castle of Montfaucon is built atop a rocky outcrop in the eleventh century by the first Lord of Montfaucon in early feudalism: Conon Montfaucon, vassal of Count Renaud I of Burgundy and the powerful archbishop of Besançon and Prince of the Holy -Empire Roman Hugh I de Salins. In the thirteenth century, a fortified town is based next to the castle, and has a parish church in 1311. The family of the Lords of Montfaucon is then one of the families of the most powerful lords of Burgundy County and Montbéliard county during the Middle Ages and in the composition of the lineage of the counts of Montbéliard from the twelfth century with Amedeo II Montfaucon. In 1477, the castle is one of the few castles of the County of Burgundy not to be destroyed by the army of King Louis XI after the death of the Duke of Burgundy Charles the Bold and the attempted military annexation by the King of France Burgundian State (which includes the County of Burgundy). It is transmitted in the fifteenth century in inheritance to the family of Chalon-Arlay, Prince of Orange and will remain in their possession until the French Revolution. The castle is definitively abandoned after the 10-year war (1634-1644) led by Richelieu (cardinal and first minister of Louis XIII) in an attempt to regain Burgundy County the Spanish Habsburgs. In 1984, the town of Montfaucon bought the castle ruins and started from an important and long restoration project for tourism.

How To Get To Château de Montfaucon (Map):