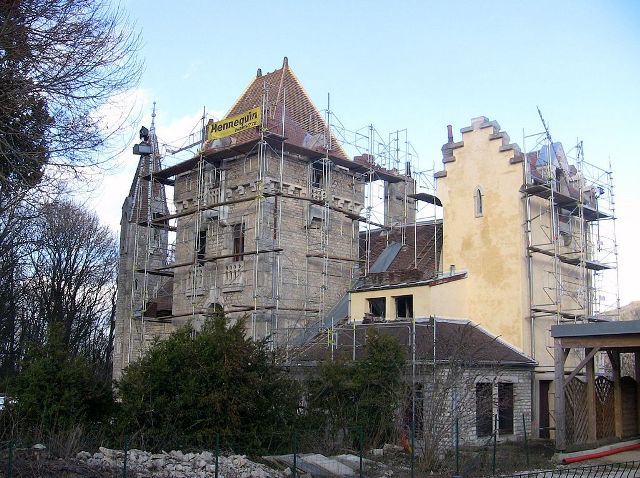 Location: Chalezeule, in the Doubs departement of France (Franche-Comté Region).
Built: 1850.
Condition: Ruins.
Ownership / Access: --
Notes: Château de la Juive, better known as the Jewish castle name is one of the most remarkable private houses Besançon (Bourgogne-Franche-Comté). It is located on the common boundary of Chalezeule, close to the historic district of Bregille and on the tip of Mount Brégille. The base building was built at an unknown date, but the first traces about it date back to the late eighteenth century, before the powerful Jewish family Lippman does become owner. This is also one of their descendants, Leonie Allegri, who asked the architect Alphonse Delacroix Franche-Comté to turn it into a real castle. Between 1850 and 1870 he gave birth to the building as we know it today, with its Gothic style and its characteristic watchtower. The dynamism of the owner gives the house its always current nickname, the "Jewess of the castle." Subsequently, the building changed hands and became a famous hotel-restaurant for its quality of food and its remarkable scenery, earning a national reputation and attracting many celebrities. However, this mission ends in early 2000s, when the last chef dies, the castle recovering since then, a purely residential function.