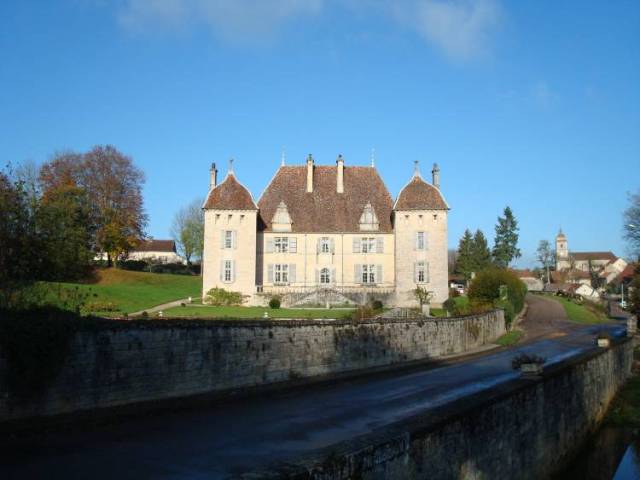 Location: Filain, in the Haute-Saône departement of France (Franche-Comté Region).
Built: 15th century.
Condition: In good condition.
Ownership / Access: Privately owned.
ISMH Reference Number: PA00102162
Notes: Château de Filain and its French garden are at Filain (Haute-Saône) in Burgundy, Franche-Comté 13 km south of Vesoul. The castle is Renaissance, built retaining elements of the fortress from the fifteenth century and rebuilt in the eighteenth and nineteenth centuries.It was built by the family of Sacquenay in 1550 and inhabited by the family of Cointet, then by the family of Marquis Camus Filain. In 1808, General Baron François Jacob Marola bought the castle and guard forty years (he saves Besançon Austrians at the Battle of France). The Brulin-Demandre family succeeded him.The castle was remodeled in the seventeenth and nineteenth centuries. The decree of April 14, 1927 who scored in the inventory of historical monuments have been canceled, the castle was finally classified by order of 20 April 1944. In 1980, the family Montornès takes the field and began the restoration of the castle and its gardens. They take place in a park built in French, and include a boxwood hedges and a rose garden with a variety of roses named after the castle.Formerly castle fortress dating from the fifteenth century with four round towers, walls and moat. The castle gets two square towers in the sixteenth century and the wall that closed access to the courtyard is deleted. The guard room has a Renaissance fireplace.