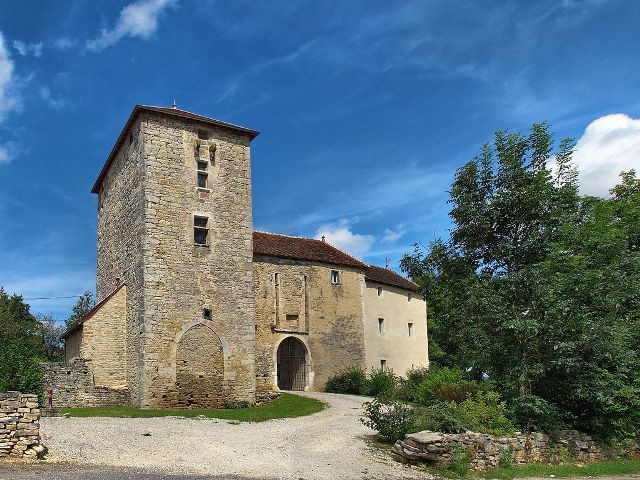 Location: Burgille, in the Doubs departement of France (Franche-Comté Region).
Built: 14th century.
Condition: In good condition.
Ownership / Access: Private property.
ISMH Reference Number: PA00101620
Notes: Château de Cordiron is an ancient castle located in the municipality of Burgille in the French department of Doubs.The castle or fortress of Cordiron already appeared in 1237 on the legacy that Stephen II Auxonne to his illegitimate son Stephen Oiselay. In 1366, the castle is owned by a branch of the house Oiselay taking at that time the title of Lords Cordiron1. This branch of the family Oiselay died in 1378 the lordship then passed to different families such as Andelot, the Ferriere and Balay. The powerful family of Gorrevod gradually becomes mistress of the whole area and lordship of Cordiron the late sixteenth century, embedded in Marnay marquisat in the early seventeenth century. In 1584, you could still see a main building with a barn and a wall up along the tower with a drawbridge and a bridge lying. The Lord then Cordiron François Gorrevod, Salins baron. In the eighteenth century, the tower was used as a prison while the family Bauffremont has the lordship of Cordiron. In the nineteenth century, the castle became a farm and suffered extensive damage from lack of maintenance. The square tower, old fortified gate and staircase were listed as historical monuments May 16 1979. From 2001, the castle undergone extensive restoration, the square tower called former dungeon, is notably restored in 2009, its new roof, stained glass windows and doors are installed.