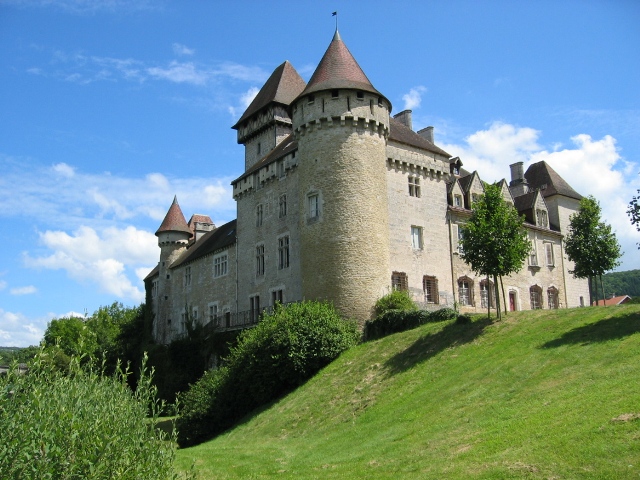 Location: Cléron, in the Doubs departement of France (Franche-Comté Region).
Built: 19th century.
Condition: In good condition.
Ownership / Access: Private property.
ISMH Reference Number: PA00101627
Notes: Château de Cléron is a castle in the twelfth century Cléron in Bourgogne-Franche-Comté (25 km south of Besancon). The private gardens are open to tourists during the summer.It is the subject of a registration as a historic monument since July 6, 1988.Before the nineteenth century, the family of the lords of Cléron succeeds family Scey lords to control the passage of the wooden bridge on the Loue on the main "road salt" of Franche-Comté (road from Besançon to Salins- les-Bains and ensuring the prosperity of the region in the Middle Ages). Cléron Castle was built in 1320 along the Loue by Humbert Cléron (vassal of the county of Burgundy) on the site of an ancient Gallo-Roman castrum. During the 10-year war (1634-1644) led by Richelieu (cardinal and prime minister of King Louis XIII) to try to win the County of Burgundy to the Habsburgs of Spain, the village is devastated first by Swedish mercenaries the pay of France in 1639, then again in 1641 by the French. The castle is significantly modified in the eighteenth century while retaining its medieval defenses, keep, battlements, loopholes and stun ... It is flanked by a square tower called "clock tower" in the nineteenth century. This castle in perfect restoration, currently privately owned by the family of Montrichard, no visits, with the exception of summer gardens.