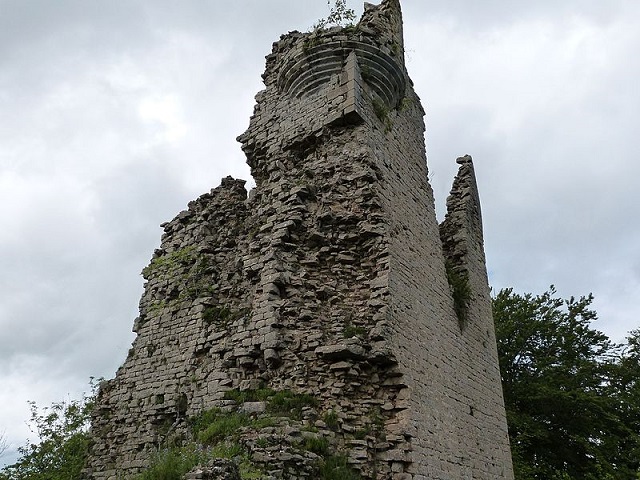 Location: Publy, in the Jura departement of France (Franche-Comté Region).
Built: 10th century.
Condition: --.
Ownership / Access: Sires of Coligny.
Notes: The castle of Beauregard is located on the town of Publy in the Jura department in Burgundy-Franche-Comté region.Perched at an altitude of 660 m, at the southern end of the Côte de l'Heute, the castle of Beauregard is made up of an imposing hexagonal keep, flanked by a corbelled turret, a fortified house and barns Surrounded by an enclosure preceded by ditches dug in the rock. It is located at a strategic point of two communication routes: the Salins way from Poligny to Lyon and the Heute bay to reach the Ain valley two kilometers south of the Rette road linking Lons -le-Saunier to Blye, where one crossed the Ain in ferry. This castle was built for the lords of Coligny, probably in the tenth century because it was cited in a papal bull at the beginning of the twelfth century as: Castrum Bello Respectus or around 1237.It belongs to the Monnet family during the 13th - 14th centuries. A puissant taken besides the name of this fief. One knows Odon de Beauregard and Robert, his son, cited in 1331. During the alliance between Nicolas Rolin and Guigone de Salins (December 20, 1423) this castle is brought in dowry by the latter, and is stipulated in ruin ... It may have been restored, as suggested by some of the angles. According to the Jura literature, it seems to have been taken and dismantled by the troops of Louis XI around 1479. Rebuilt, it would have opened its doors to the troops of Henry IV in 1595, and would have been definitively demolished in 1668 by order of Louis XIV. The stronghold disappeared without leaving any traces. Of this imposing fortress, only the donjon remains, whose southeast angle shows the substructures of a watchtower. Inside, the northeast wall houses the covered covered walkway; Three cracked windows and a large loophole are also well preserved. In 1726, the lordship of Beauregard was bought by the Verniers of Blesney, who had no children. When they died in 1732, it was the Blandin family of Chalain who inherited it, as well as the fiefs of Blesney and Mesnois. They were still lords of Beauregard at the time of the Revolution.