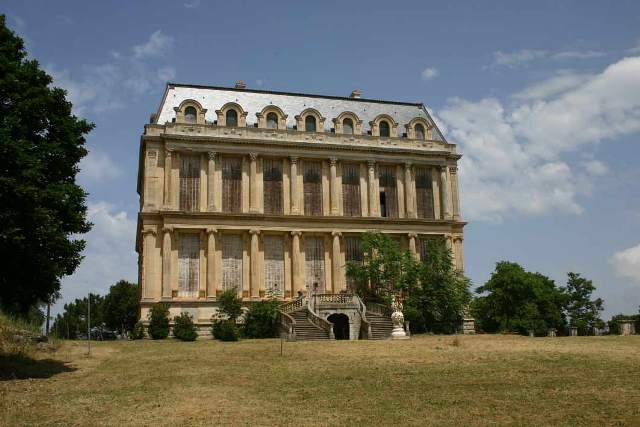 Location: Alata, in the Corse-du-Sud departement of France (Corse Region).
Built: 19th century.
Condition: In good condition.
Ownership / Access: Owned by the department.
ISMH Reference Number: PA00099072
Notes: Château de la Punta is located in Corse-du-Sud in the town of Alata. The castle was inspired by the "flag Bullant" of the former Tuileries Palace, where he takes part of the facades, while integrating other parts from various pavilions that made up the palace. Each facade is different, which provides a good illustration of the appearance presented by the palace disappeared. In 1978 a fire in the surrounding bush won the castle and destroyed its structure and its roof, which led to its closure to the public. In 1992 the castle and damaged and its 40-hectare park was acquired by the General Council in southern Corsica to the sum of ten million francs (excluding furniture); in 1996 destroyed the wooden structure was replaced by a metal frame, poles masking skylights that, devoid of woodwork were closed to ... Plexiglass, and put a new roof. The destruction of the roof for eighteen years and water infiltration that resulted in the Mediterranean climate, the passage of time, led to a significant deterioration of the building that today requires very substantial rehabilitation. The large terrace has been listed on the Inventory of Historical Monuments July 27, 1970, and the facades, the hall, the staircase, the lounge, the large living room, dining room and library have been classified historical monument February 7, 1977.

How To Get To Château de la Punta (Map):