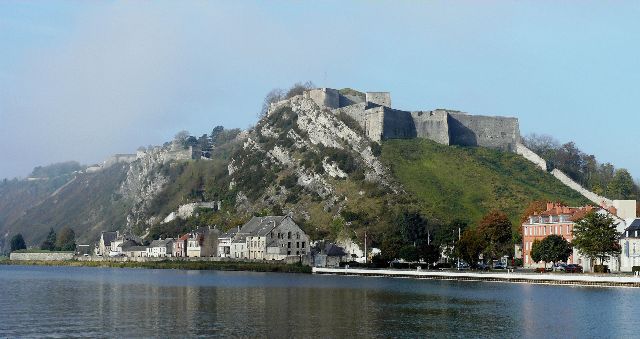 Location: Givet, in the Ardennes departement of France (Champagne-Ardenne Region).
Built: 1555.
Condition: In good condition.
Ownership / Access: --
Notes: Fort de Charlemont is a French stronghold near the Belgian border on the Meuse. Unlike the name commonly given to it, Charlemont is not strong, it is in its present form of a citadel, consisting of a network of successive defenses. It overlooks the town of Givet and controlled the Meuse valley. Its construction was decided by Charles V in 1555, having obtained the transfer of Givet by the bishops of Liege.In 1554, King Henry II of France launches three armies against the Spanish Netherlands and put the country with fire and blood. An armed headed by the Duke of Nevers took Givet to home base. Charles V asked General Martin Van Rossem to lead his army over Givet and expel the French army. Following the incursion, Charles V decided to build a fort to protect Givet. In October 1554, Charles de Berlaymont, County Governor of Namur, Givet sent to an Italian engineer, Donato Buoni Pellizuolli and Jacques du Broeucq to choose the best site.The name of the fortress (meaning Mount Charles) comes from that of the emperor Charles V who did buy this region (County Agimont-Givet) by his sister Mary of Hungary, to control the corridor the Meuse valley. The original fort, built during war, would have required, from the year 1555 3000 helped workers of 20,000 infantry and 3000 cavalry. In July 1555 the French army returns to the assault of the city. The guns fire from the fort under construction. William of Orange, appointed commander of the army of Charles V, pulls these fights the conclusion that we must enlarge the strong westward. The extension includes orillon bastions protecting open casemates resuming the map of Fort Philippeville. The extension was completed in 1563-1564 under the direction of the engineer Jacques Van Oyen, nephew of the engineer Sebastian Van Oyen, designer Philippeville.At the end of the sixteenth century until 1675, the Spaniards built a second enclosure: east: pincers in front of the high bastions built by Pellizuolli, west: two hornworks before the bastions of Trélon, north: three half-moons. In 1680, the fort and the town of Givet are given to the king of France, Louis XIV, in implementation of the Peace of Rijswijk. At the end of the seventeenth century Vauban complex and improves the defenses of Givet and Charlemont, surrounding the city walls. Transforming the village into Charlemont citadel. After Napoleon's defeat at Waterloo June 18, 1815, troops of Marshal Grouchy fold over Namur and Givet and occupy the citadel. General Bourke, governor of places of Givet and Charlemont, locked with 4 000 men, refused to surrender the stronghold, but must eventually sign an honorable agreement Givet delivering the Prussians. The city of Charlemont rest for its French part. After the Treaty of Paris of 20 November 1815 Givet is busy in January 1816 by 7,000 Russian soldiers. In October 1818 Givet is returned to France.

How To Get To Fort de Charlemont (Map):