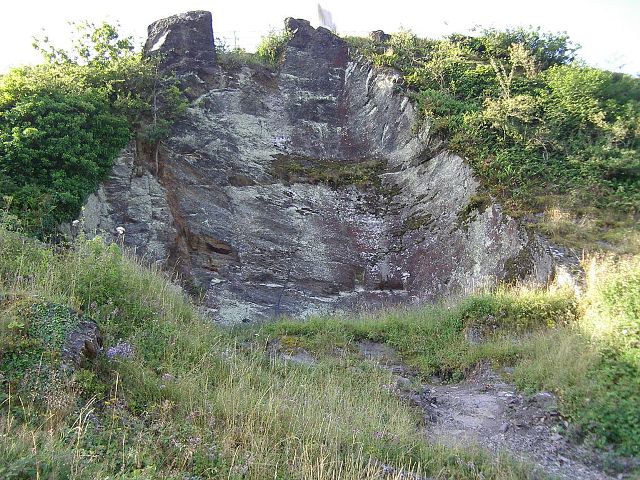 Location: Bogny-sur-Meuse, in the Ardennes departement of France (Champagne-Ardenne Region).
Built: 12th century.
Condition: Ruins.
Ownership / Access: --
Notes: Château-Regnault is a medieval fortress whose ruins are located on the upper reaches of the French Meuse up to the village of Château-Regnault (town of Bogny-sur-Meuse) in the department of Ardennes and whose origins date back between the twelfth and sixteenth centuries.The current location of the monument of the statue of the horse Bayard stood the fortress of Chateau-Regnault. Translation of the charter recalling the construction of the castle: "I Hugues III, eldest son of Earl and Count of Rethel, informed all present and future that these letters will I again built the castle Renauld between the village of Braux and Laval-God, Chasteliers called the mountain and that I submitted to the law of Bouillon Castle. I promised the same freedom and to observe the same customs future villains such as those enjoyed Bouillon. In testimony whereof I have confirmed these letters by the opposition of my seal. Given in the 1227 years, in May » - Hubert, Mixes p. 182, translation from Latin It is claimed to be the location of the legendary Montessor, the fortress of the four son Aymon in the Ardennes, named after Renaud Montauban2. The fortress was the seat of a sovereign principality, from 1545. The last sovereign of the principality were François de Bourbon, Prince of Conti and Louise Marguerite de Lorraine. The Prince de Conti was a prince of the royal blood, his cousin was none other than King Henry IV. For its part, the princess was the daughter of the former ruler of Château-Regnault Henri Scarface. The reign of Prince lasted until 1615. Afterwards the Princess kept the principality until 1629, when it ceded to King Louis XIII. Since 1625, Richelieu had started negotiations and the sale was finally held on March 10 1629. During the erection of the monument in 1933, some finds were made: coins, swords, arrowheads, dishes, and some animal bones. When we consult a few articles on the site of the fortress that many findings observed were made at various periods of history (nineteenth century, the twentieth century) The fortress was to be a relatively small eagle nest. However according to the different findings sovereign had to have a good life.

How To Get To Château-Regnault (Map):