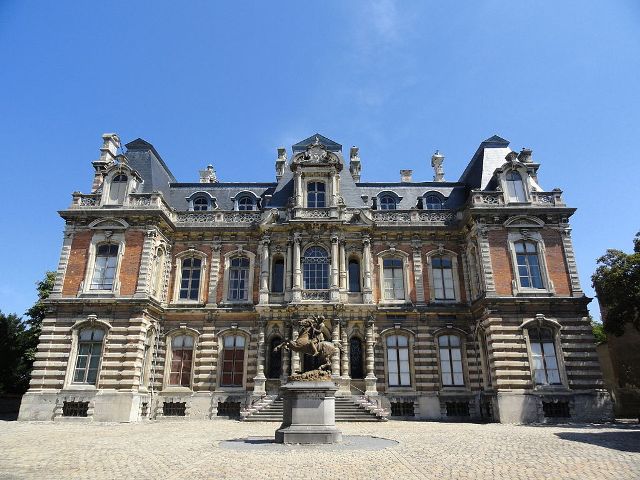 Location: Epernay, in the Marne departement of France (Champagne-Ardenne Region).
Built: 19th century.
Condition: In good condition.
Ownership / Access: Owned by the municipality.
ISMH Reference Number: PA51000019
Notes: The Chateau Perrier Louis XIII style and is influenced by the late romanticism. In the center of the courtyard stands an equestrian statue cast called "The Huntsman". The building plan is similar to a rectangle but with three front part of the courtyard, two on the last corner and rounded front part down the middle of the garden. Two round turrets complete the general plan. The castle therefore has the distinction of having different style façade, it was an owner's will. The front and rear exterior stairs are straight, masonry. The building has a lift, a leading domestic France. The walls of the ground floor are the boss and alternate stone and brick, they also consist of front building of limestone size. The floor is brick; pilasters and windows frames are also in stone. Two large cylindrical chimneys, combining brick and stone spiral out of the slate roof. Common in two buildings, are also composed of a filler and brick substructure, columns and frames limestone bay.